You know, if I recall correctly, I believe I swore up and down that we'd never keep a buck here at Krazo Acres.  For several years we took our girls on dates to other buck-owning farms for their date, a small amount of cash or a couple of homegrown frozen chickens exchanged hands and that was that.

The first buck was pawned off on us by a friend who no longer needed him for breeding purposes.   We kept Pan, the Nigerian Dwarf buck for about two years and used him on all our dairy gals.  He was a total shitface and there were times I had to wrestle his piss-stained and rank tub of muscle and hair down to the ground just to let him know who the boss was.  I may have eventually proven that I, in fact, was the boss....but it was definitely not a "win" for me as rolling on the ground with a buck goat is nothing more than total olfactory torture.  I sold him to the first person who agreed to come get him and give me four bags of corn.  Smell ya later, dickhead! 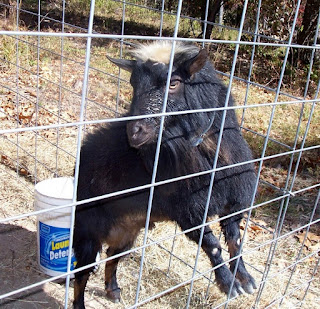 We were buck-less for a year I think, then I decided that we needed to have goat MEAT on the farm.  So I got Lily and Herman, our first Boer goats.  We kept Herman intact to use for breeding.  He is a prick as well.  Not nearly as much of a jerk as Pan was, but unfortunately there is no way that I would be able to take Herman down.  The first breeding year I was able to get in to the buck pen to bring the does to him, but it's no longer safe to do so.  Now I will bring the does in the pen & Paul will be right behind me brandishing a pitch fork or a long section of metal pipe.  Herman has one last fling here and then I'm putting him on the sale page and shipping his sorry butt outt'a here. 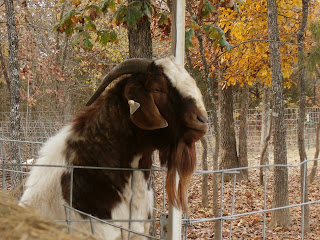 Studly Do Right was purchased as a bottle baby to be Herman's replacement.  He is much nicer, even friendly and I'm assuming that is because he was babied by us.  He wants to be around you and not try to knock your skull in or rear up to you.   Although during breeding season I don't scratch or pet him unless it's with a stick.  The fact that he doesn't have the huge set of horns like Herman is also a major bonus. 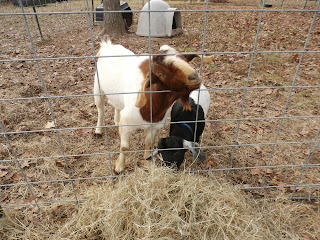 Moe-lassas is our newest buckling.  He and Moo-latte were out of a Nubian / Boer doe and Herman so I'm guessing the black heads came from their Nubian lineage.  He isn't the biggest buckling we've had, but I'm really a sucker for the black heads now so I'm going to give him a shot at breeding this year.  If he's shooting blanks or becomes a jerk, he's off to the sale barn as well. 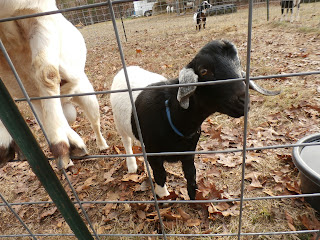 So now I find myself with not one, not two, but THREE stinky piss-faced bucks.

Annette & Pyewacket have already been bred to Herman and Dilly, MamaGoat, Lily and Daisy have been bred to Studly.  We tried giving Moe-lassas a shot with Maypop, but he seemed to be more motivated than functional.  Unfortunately she's no longer in heat so we'll have to give it another go-round in two weeks.  Moe will get one last shot and then Studly will get his chance.

Pickles is still holding out on us.  We tried getting her in with Herman but no connection was made.  She's going to end up as sausage if she doesn't get bred this year.

So it looks like we're going to have a late kidding season next Spring beginning in the middle of March and dragging out into the end of April.