Even though we sold 99.99998% of the goats here on Krazo Acres Compound a few months ago, we kept three of them because.......well, because of some reason that I can't recall. Anyways.

One of them, Cactus, was pregnant and was about to pop. Thankfully she chose one of the few hours of somewhat-dry time between the days and weeks of rain to do so. Paul went to check on her and she had just successfully birthed two bucklings, although one of them still had the fluid-filled sack around him even though he was completely out. Luckily he found them in time otherwise I fear that he may have sufficated / drown before Cactus got around to cleaning him off (as she was still busy cleaning off the first one. I've never seen a kid born still inside the embronic sack, but apparently that happened yesterday. The kid can still receive oxygen if they are in the sack and the umbilical cord is still attached to the mother, but once the cord is broken, the only way to receive oxygen is for it to actually breathe that oxygen in. Paul and Rhiannon broke the sack, swung him a bit (to remove fluid from lungs/nose/mouth) and got him to take his first breath of air.

Mom and kids are doing well, but now we are moving upwards in the number of goats here instead of decreasing the numbers. The only "good" thing is that they are males. Normally I would be bummed, but since we do not want any more goats, I'm releived that they will be going into the freezer this fall and providing our family with several nourishing meals.

The above accounting on what exactly transpired yesterday during the goat birthing is brought to you second-hand (or is it third-hand??) as I was not there for the event. I was first notified by my daughter when I got the call at work. She told me the story, said she was glad that Cactus finally popped, mentioned that she is goat-grandmother, and rounded out the mostly-one-sided conversation by telling me that she had to take a shower because she had, "polenta all over my shirt" and had to clean herself up.

I suppose a normal person would have immediately chuckled and responded to her saying, "I think you mean placenta, right?"

But I had to pause for a moment. Because this is what was going through my head in the half-second before I respoded.....

For those who do not know, this is Merrian-Webster's definition of polenta:

Rhinannon and I enjoy polenta. It is easy to make and very adaptable to many dishes. I highly suggest you try it. Yummy.

Rhiannon is schooled in cooking polenta.

So, my mind, in that half-second before I answered her, I had to decide if she:

A) Meant to say "Placenta" instead of "Polenta" or

Neither of which were really out of the ordinary. 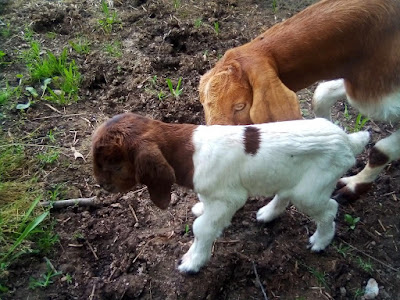 The correct answer is A)

But B) would have been just as believable.
Posted by Carolyn at 11:08 AM 11 comments: