I got a Paddling

I bought some ducklings about, uhm, a while ago. On a whim, of course. Saw an ad in the local paper & I'm like, I'M ON IT!

About an hour later, $27 lighter, and nine ducklings heavier, I was home with my new Pekin charges.

We had hatched out two mallard drakes from the neighbor's duck eggs earlier this spring and I was hoping to get some duck eggs for eating / incubating. Not so much happening with two males. So at least now I had the missing female piece of the future duck eggs puzzle.

We raised Pekin ducks about 12 or so years ago. I remember them fondly. Well, I was fond of the way they tasted. Smoked duck with an orange / cranberry sauce is absolutely delectable. I think I ate the entire crispy smoked skin from one of them myself. Heaven. Wonderful. Lip-smacking good.

So you may ask why, if they were in fact so delicious, that I waited 12 years to grow out more Pekins?

Because they are freaks.

That first batch of ten Pekins were hand raised by yours truly. I didn't bring them in bed with me, or have tea parties with them, but I was nice to them, even tried (unsuccessfully) to win their affection with special treats. But they hated me. Absolutely, positively, undeniably hated me. Every time I went into their outdoor enclosure they would run as fast as their little flappy feet would take them, right into the corner of the fence, all ten of them vying for the place farthest away from me.....and practically sufficating each other in the process. I fed them. I watered them. I brough them fancy snackies. But they were just the most nervous, noisy, scardy-ducks I have ever seen.

So I was hoping that THIS batch of Pekins would be different. I don't know why I bother hoping for anything. Because they are just as excitable, freaked out and neurotic as those first birds. Except these guys (and hopefully gals) have the run of the entire farm. Paul let them out of their outdoor enclousre one day and they never went back in. How they've escaped becoming coyote or hawk or bobcat meals, I have no idea. We've never had a white hen last more than a few months here.

But all nine of them have survived from Spring, to Summer and into Fall. And they are still freaks.

They do, however, provide a very nice lawn-keeping service. I haven't seen a cricket or grasshopper in any area that they have access to. Not a one. I've watched them for some time and they all stick together and waddle, bills down, across the lawn and suck up anyting that is moving. And they don't scratch up the plants like the chickens do nor crow all freaking day like the roosters. When they get spooked they make Crazy-Kazoo noises, but not so often that it becomes a migraine. Four of the nine ducks are drakes, so all but one of them will become the centerpiece of the upcoming Holiday Dinners. The lucky survivor will have the five Pekin females to look after and hopefully be Ducky Daddy to more ducklings in the near future.

I don't think that we will switch over from chicken to duck (for eggs & meat), but I'd like to keep them around if only to give the gardens an all natural, organic, flappy-footed and kinda-cute insect control team. 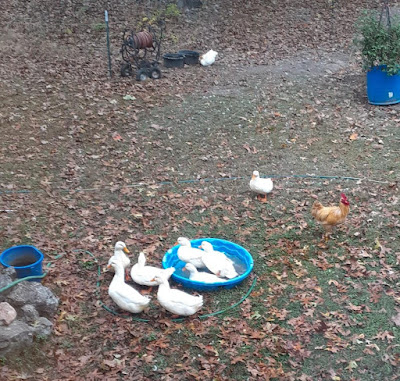 By the way, if you're still confused about the title of today's blog post, a "Paddling" is a group of ducks in the water. You're welcome.
Posted by Carolyn at 10:46 AM 2 comments:

The Flavor of Fall

Wow. That was a little weird.

Persimmons are what Fall would taste like, at least in my tiny corner of the Ozarks. But not the store-bought persimmons; Oh no, no, no. Those huge, shiny, perfect looking persimmons that you find at your local grocer are not what I’m talking about. I’m talking about those squishy, rotten looking orange and brown’ish globs of goodness that you find on the ground underneath the holiest of holy fruit trees.

My first encounter with a persimmon was about 20 years ago, off an old dirt road in the Missouri Ozarks. We were driving along with our friends, Mark & Rita, and they suddenly swerve over to the side of the road and Rita tells me to follow her out of the car. She is picking up a bunch of dark orange, squishy golf ball looking things and popping them into her mouth and then hands me one. She is the person who introduced me to poke weed (and I didn’t die), so I trusted her. But if it were anyone else but her handing me one of those things, I likely would have recoiled from them thinking they were trying to poison me or something. So I follow my mentor’s lead.

1. Take the top cap off & toss it away
2. Pick off any obvious dirt or debris
3. Pop the entire thing in your mouth
4. Squish it around in your mouth to extract the pulp while taking care not to swallow the large seeds
5. Swallow the good stuff
6. Unceremoniously spit the mass of seeds out onto the ground (hopefully away from everyone)
7. Lick fingers clean
8. Repeat

And from that day forward I looked forward to freezing nights and falling leaves.

Persimmon trees are not uncommon around here, but there are only a few large trees that I know of that produce the largest fruits and biggest yields…none of which are on our property. We have several younger trees in the goat yard, and a dozen or so in the woods that I have found, but none that are really my go-to harvesting tree. And the trees that the goats have access to are pretty much a zero-yield for me as they know exactly where those trees are and congregate around them waiting for the fruit to drop. Besides shaking the bucket of grain, the other sure fire way to get the goats to come a-running is to shake a persimmon tree and they are on it like fruit flies on your kitchen compost bucket. 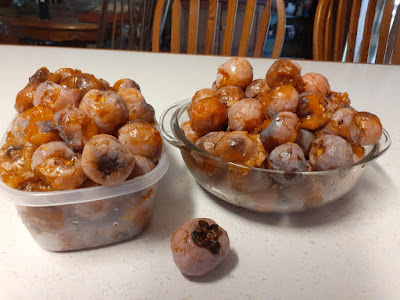 So how did I acquire my latest haul? I left the woods and went to Taco Bell.

A friend and I went into town this weekend to do some thrifting. On the way out of the parking lot, she tells me to pull over towards the road (but still safely in the parking lot). In the narrow grass strip between the road and the lot there is a large persimmon tree just filled with persimmons. I almost pee’d myself I was so happy. I jumped out of the car and proceeded to pick up as many fallen persimmons that I could cram into my Salvation Army plastic bag and shoveled no fewer than ten ripe fruits into my maw. What a scene for the line of cars in the Taco Bell across the street to behold! Slightly overweight, pony-tailed, middle-aged lady in barn-chore jeans and t-shirt, squatting & waddling underneath tree on the side of main road, tossing squishy & sticky overripe fruits into plastic bag and licking her fingers. My friend stayed in the car and opted for a more civilized lunch from Taco Bell. So while she ran in to get a chicken taco thingy, I sat in the car…..eating more persimmons. When we pulled out of the parking lot, the spot next to me was heavily littered with persimmon seeds. And I had a bellyache. But oh sooooo worth it.
Posted by Carolyn at 1:20 PM 7 comments: