While most people are posting pictures of their massive bounty of zucchini, I, alas, have not a single one.

Paul had planted a shitton (yes, that's a technical term) of summer squash seeds over a month ago and maybe one of them germinated.  And even that one is struggling to hold it's own.  I think it had two flowers; both male, of course.

So we reseeded with a few more and they aren't doing very well either.  I suppose I can say the excessive rainfall has put a damper on their growth, or it could be that even my mere presence is making things want to die.

The older plants in the tires were doing well until just a few days ago.  This morning I went out and saw the evidence of the evil Squash Vine Borer.  I did some surgery on two of the main vines and removed the bastards and I'm hoping that the vine will recover.  We'll see.

But even though our squash harvest is going to be squat this year, the cucumber harvest has been excellent.  Apparently the cucumber plants don't mind the recent deluge and whatever bug that normally would eat cucumbers hasn't found them yet so they are growing like crazy.  We have to go out and pick them every day or we'll end up with cucumbers the size of a Volkswagen.  It's amazing how quickly they grow:
So to say that we've got cucumbers coming out of our ears wouldn't be that much of a stretch.  I've got sweet & sour cucumbers in the fridge and had a bowl for breakfast: 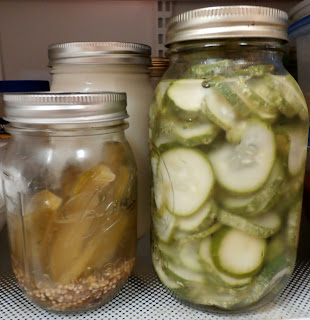 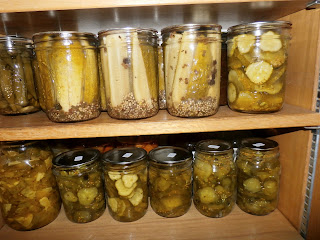 Cucumbers in the sink: 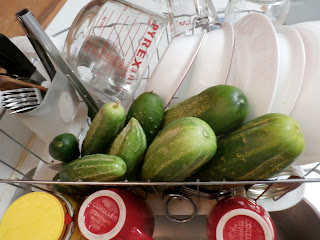 And even in my purse: 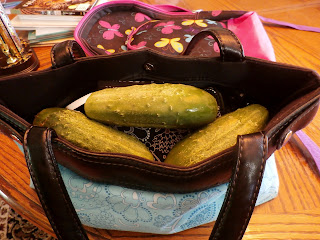 Because you all carry produce in your purse all the time, right?  You never know when you're going to get a hankering for a crisp, refreshing, homegrown cucumber!
Posted by Carolyn at 3:44 PM