The Creepy Meats and Barred Rocks are two weeks and three days old today.  And the Meats are far surpassing the Barred Rocks in size and stature: 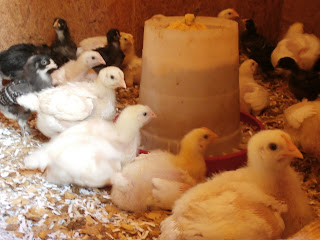 Time to move them to separate pens, not only because the Meaties are taking up a lot of the space, but because they tend to crowd out the other chicks at the feeders.  Rhiannon helped me transfer the Meaties out from the little pen into the larger pen and they'll stay in there for another two weeks or until I get the chicken tractor up to snuff again.  Then I'll give the larger pen a good cleaning and put the Barred Rock pullets in there until they're ready to join the rest of the flock.

In theory, once the Barred Rocks start laying, the Rhode Island Reds, which I am none too fond of lately, will be crated up and put on the sale page.

The Creepy Meats are supposed to be ready in as little as eight weeks, but since we accidentally got males and females I tend to think we'll be keeping on the females for another two weeks or more.  And if we get to the eight week point and the males aren't huge, we'll keep feeding them as well.  Last season I was so fixated on getting the birds in the freezer at exactly eight weeks that we butchered them before they were our ideal size.  A few of them even weighed under four pounds.  That's not going to fly with a family that absolutely love-love-loves roast chicken supper with leftovers for chicken salad sandwiches the next day.

Since I was cleaning out the chicken pens I figured I may as well work on the other areas of the barn.  Lots of dust, chicken feathers, spider webs, spilt grain, mouse turds and mud wasps.  There was flying dirt & empty feed sacks being hurled out the doors.  Goats crowding around the doors in hopes that something GOOD would come flying out.  They did manage to get a few nibbles of leftover grain in the not-quite-empty feed sacks and quite the ruckus was made when a new one was tossed out.
The chicken coop side of the barn still needs cleaning as does the goat loafing area.  There's lots of accumulated wasted hay and goat turds that need to be shoveled out of there and put into the garden beds but it's just so dusty that I'm kind of waiting for a rain to make it not so horrible on my asthma.  Even a dust mask can only do so much.  I'm thinking that it would be a wise move to invest in a  respirator so I put one on my Amazon "to buy" list.

Don't forget; if you haven't already done so, click on this post if you want a chance to win some homemade lard soap :)  You have until Sunday night!
Posted by Carolyn at 3:57 PM