The peepers, frogs, salamanders and toads are thoroughly enjoying the overly-wet spring we’ve had. 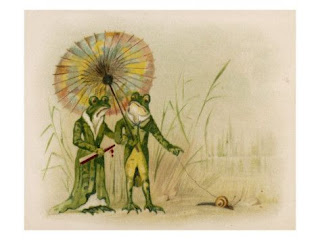 My garden, on the other hand, is not.

As of May 31st, our area has already recorded a total of 39.98“of rainfall, 15 of which happened in May alone.  We are only 5” from our average total YEARLY rainfall.  To say that it’s a soupy, swampy mess around here would be an extreme understatement.

We planted tomato and pepper seeds and starts outside the first of April.  It is now the first week of June and they have either rotted in the ground, stunted or have been washed down to the creek, never to be seen again.   One of my sage plants have basically rotted to death, the marigolds are waterlogged, beans – if they even came up – are growing s…l…o…w…l…y.  What corn plants Ms. Melman hasn’t been able to reach & chew up are doing ok, but the squash and beans planted in the Three Sisters mounds aren’t doing very well.

Pea seeds have gone into the ground twice now, the first batch rotted and the second batch didn’t do much of anything and it’s already getting to hot for them anyhow.  First planting of cucumbers and pinto beans shared the same waterlogged death.   The herb garden, which seems to thrive in the midst of heat, poor soil and watering whenever I get around to it, is also taking a beating.

We did, however, get a great harvest of radishes!  White Icicle and Breakfast radishes to be exact.

Grass, weeds, moss and  fungi are about the only things (other than giant radishes) benefiting from all this moisture and the goats / mule / chickens / whatever-the-hell-other animals we have are gorping on greenery.  Enjoy and fatten up, goaties, because it’s going to be a meat-heavy and veggie-light harvest come fall.

So since we actually want to get some sort of consumable vegetable matter out of the garden this year we are going to have to get more seeds in the ground.  I may as well just toss them off the back porch & say “Good luck, suckers!”  Probably get a better yield using that method.

I wonder if there is a book on Swamp Gardening?
Posted by Carolyn at 10:50 AM