There is a lot of plantain in our yard and mostly year round.  In the spring, you can gather the smaller leaves for a salad or cook them like spinach.  The older the leaves get, the tougher they are and they develop several fibrous veins that are pretty much impossible to chew up without looking like a goat eating bailing twine.

Instead of using the leaves, last week’s dish was young plantain seed stalks (or whatever they are called) and seed heads.  The younger seed stalks were much softer and I could nip them off with my fingernail.  The older seed stalks I snapped off at the bottom and “zipped” off the seeds by running my thumb and forefinger down the stalk and letting the seeds fall to a bowl sitting below.

I boiled up the younger stalks for a few minutes, drained them and then sautéed for a minute in butter & salt. 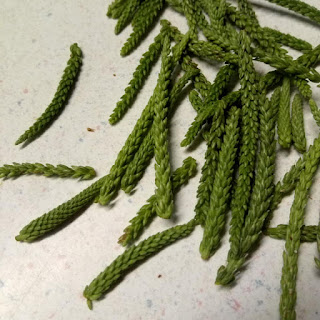 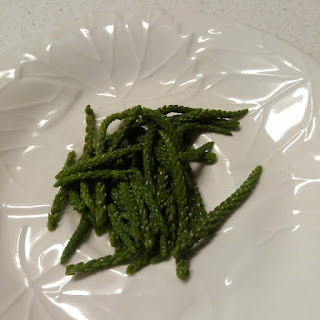 They were not my favorite.  I was hoping that the younger part of the plant would not be bitter, but alas, it was.  But that’s fine.  There weren’t nearly as many younger shoots as there were older seed stalks so it’s not like I’d be picking many of them anyhow.

I boiled the plantain seeds for about five minutes, drained, rinsed, then sautéed them with a bit of butter & salt.  They were much more palatable than the younger stalks.  I ate them stand-alone, but they would be good to toss into a soup, or maybe with a rice dish or anything that called for “greens”. 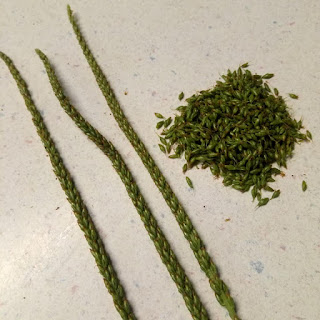 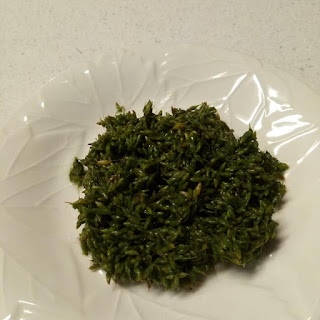