One of Paul's co-workers has a flashy Nubian buck that we went to see last week.  Technically, we saw him a year ago when he was a cute little bottle fed spoiled kid, but I wanted to see how he filled out.  And fill out he did.  I wouldn't have recognized Pilgrim if had they not said it was him.

We initially thought we were going to pick him up and bring him to our place.  We (meaning Paul) fixed up a little bachelor pad for his visit using cattle panels and were fully intending to keep him here for at least a week, maybe even longer.  But after visiting with Pilgrim for about a half hour, it was pretty much evident that there was no way he was coming to our place.

He was very, very aggressive.  Paul's friend had to give Pilgrim a dozen or more "what-for's" just to keep him from charging over to us.  He'd rear up on his hind legs and challenge Paul's friend....and was as tall as him when he did so.  Oh, and did I mention that Pilgrim charged the wife one day during feeding time while her back was turned?  Pinned her against the barn wall and hurt her wrist so badly that she went to the ER to make sure it wasn't broken.

The owners claim that he was acting out of the ordinary that day.  Maybe trying to challenge his master in front of all of us?  Not sure.  But when Paul and I got in the truck to go home, we immediately agreed that Pilgrim was not coming to stay with us for any length of time.  An agreement was reached that we would still have Pilgrim breed Nettie, but he would have to be tied up with a chain before we even got there and we would bring Nettie to him.

Well, today was the day.  Nettie was off her feed yesterday and today she was a little bit pink in the behind with a little goo.  She wasn't in screaming-mimi-tail-flagging kind'a heat, but I think good enough.  We hauled Nettie over there right after Paul got off work and was relived to see Pilgrim tied to a telephone pole with very stout looking chain.  He wasn't as aggressive, but then again maybe he realized he was pretty much stuck where he was at.  All in all, we had three good connections, although I don't think Nettie was as receptive as she was with Pan.  But then again, Pan was always within the does sight, she knew him, and she didn't have to ride in the back of a pick up truck going up and down hilly gravel roads to have her date.  I'm sure just the jostling of the ride would pretty much damper any amorous feelings.

No more than twenty minutes later, we hefted Nettie back into the truck and she was reunited with her herd mates.  Of course, everyone was excited to see her and wanted to know how her newest boyfriend compared to Pan.  But like any properly raised doe, she's being tight-lipped about it and refuses to kiss and tell.

And speaking of lighting one's Fire, when we got home from goat luv'n Rhiannon asked if we were going to have a fire again.  We both thought that she was talking about the campfire we had two nights earlier and said that no, no fire tonight.  But she persisted and kept talking about a "camping fire".  Then pointed to the brush pile on the other side of the goat enclosure.

Paul had set the pile aflame on Friday morning during a light rain.  It caught for a few hours, but then died down to nothing.  We checked on it every once in a while and thought it had extinguished itself.  And honestly, I forgot about it.  I go over there twice a day to get hay from the hay hoop houses but never noticed any flames or even a burning smell.  But from the time Rhiannon pointed out a few licks of flames to how long it took me to put Nettie away and grab the camera from the house, this is what we had: 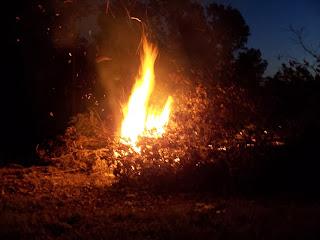 And it grew by the minute until the entire pile was engulfed in flames.  Paul is very careful when it comes to burning so the pile was already situated so it was nowhere near anything that could have easily caught on fire.  He purposely started the fire on Friday because it was raining.  But had a strong wind suddenly blown tonight, it could have taken embers into the nearby woods and caused a fire.

Paul was outside watching the pile for two hours.  I brought him beverages and supper out there while Rhiannon and I ate inside.  The pile is still burning strong, but the leaves and small branches have all been spent and the larger logs are just burning now.  We'll continue to watch it through the night.  Not exactly what we'd like to be doing during a work week when the alarm clock goes off well before dawn, but I'm glad we were home when it rekindled.  And glad that our little girl was so observant.
Posted by Carolyn at 10:27 PM