Last week I noticed a a Red tail hawk hanging around the house.  Like, close enough that I could easily throw a rock and hit it.  And I've been having the "shoot or don't shoot" debate in my head.  Back in my Suburban Days, I would have never, ever even thought about blasting a hawk.  But back then, I didn't have tasty livestock that were vulnerable to the razor sharp beak and talons of the raptor family.

We've had a couple of sharp shinned hawks hanging out here over the summer, but they weren't nearly as close to the house and chickens and I honestly wonder if they are big enough to take a hen.  Regardless, I've been known to take the shotgun outside and blast a warning shot to scare them off.

The Red tail, however, was much, much bigger and much more tolerant of my yelling and arm waving.  And I know why he was staying around here.  The squirrels have been going bonkers lately, stuffing their little rodent maws with acorns and shoving them into some hidden cache in the woods.  There were a crapload of squirrels.  Like, one could almost step on them while walking through the woods.

So I suppose I can't blame Mr. Red tail for his preference of perching areas as the potential for a squirrel supper was probably pretty good.  And the fact that he hasn't plucked the little rooster chick from the goat yard is good news.

Since we didn't want the Red tail to have all the fun (and meat), Paul and Rhiannon took a little hike behind the house yesterday evening and got a nice, plump squirrel. 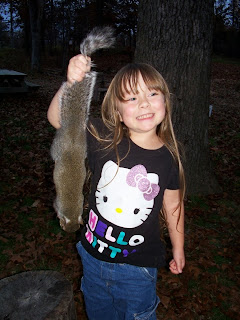 Not enough to make supper out of, but I'm hoping if the winds ever die down today I'll be able to get another two and we'll be eating high on the hog, er, I mean, squirrel.
Posted by Carolyn at 12:13 PM