Apparently SOMEbody thinks we have pasture

The seemingly never-ending job of making pasture out of the woods (growing out of rocks and boulders, nonetheless) must actually be coming along, if only bit by bit.  I say this not only because we (meaning Paul) has been taking down more trees, but because just a few days ago I heard something strange.  Not strange as in "What is that?", but strange as in "What is that sound doing HERE?"

I not only heard, but visually confirmed four Purple Martins.

These birds are not strangers to our area, but they are strangers to our homestead as these swallows live near OPEN fields where they have adequate area to dive bomb, pursue and preform aerial acrobatics in order to catch their insect meals.

I'm hoping that they are nesting, or trying to find a nesting site, in one of the many woodpecker pecked holes in the numerous snags around the property.  But in order to encourage these flying insect connoisseurs, I may have to go out and find some of those birdhouse gourds and make a few nests to encourage them to stay. 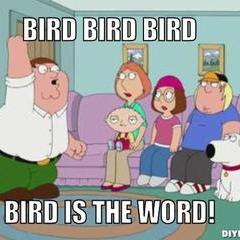 And since I'm on the subject of birds, I also noticed that the two Eastern Phoebes are back in their nests again.  Both sets managed to successfully hatch / brood / fledge their babies just two weeks ago. The one on the porch doesn't contain any eggs yet, but the male and female have been tidying up the nest and adding more goat fuzz and moss to it.  I don't know the status of the nest in the goat barn, but she must be laying eggs or sitting on them as it would be too early for hatching.

I'll try to keep an eye on the eggs in the nest though as I saw a cowbird hanging out in the goat barn this afternoon during the goat feeding frenzy.  I found a cowbird egg in the nest on the porch a few years ago (and disposed of it) and would do the same if I found one in either of the nests this year.  No free-loading allowed here!
Posted by Carolyn at 9:52 PM