I know I said that I wasn't going to bother saving any of the half eaten, half rotted peaches.  I know that if I started trying to salvage any good parts, I would spend the entire time swearing about the bug/squirrels/blue jays (yes, blue jays are now hated by me) and asking myself exactly why it is that I was wasting my time doing so.

But damnitalltohell, I wanted some peach jam!!!

So Paul and I spent gawdknows how long in the kitchen blanching, peeling skins, cutting out bad parts and trying to salvage the tiniest bit of perfect peach flesh.  Then I put them in the freezer.  Then I did the same another day.  And again this afternoon.  And will probably do it once more before all of the peaches are gone; either salvaged and frozen by me, stuffed into some hole in a dead tree by the squirrels, turned to mush by the bugs, or pecked at by the blue jays.

So far we've managed to get twenty or so cups worth of edible peach flesh....and probably four hundred and sixty-three pounds of peels, pits, and bug, squirrel & blue jay eaten bits that went to the only mildly interested chickens.  Freaking ingrates.

Once every last peach if frozen, and I hopefully haven't forgotten about them, I'll  make a weekend of defrosting them, cooking 'em into jam and canning them for the pantry shelves.

I was also hoping to get some tomatoes on the pantry shelves as well, but for all the darned tomato plants Paul put in the ground, we're just not getting very many.  First it was too soggy, now it's too hot for pollination.  The majority of the plants are Roma and a handful of slicing tomatoes in there for fresh eating, but we've only had a half dozen or so fresh ones to eat and not more than eight quarts of tomato puree (in the freezer, along with the peaches, waiting to be canned).

There are wax beans ready to be picked, but there really aren't enough for me to consider canning them.  We'll eat those fresh and if I get a bean-canning-bug up my butt, I'll go to the farmer's market and see if I can get a good deal on a bushel of green beans.

There are still cucumbers crammed in every available spot in the fridge, awaiting, well, something.  I refuse to can another jar of pickles.  Last count there were twenty-five pints of various pickled cucumbers; dill, sweet & sour, sweet & spicy, bread & butter...and that's not even counting the six or more quart jars in the fridge that I made refrigerator pickles out of.  I mean, seriously.  How many freaking pickles can anybody eat?  I'm putting in only two cucumber plants next year as I doubt we'll be through these by next summer anyhow.

The red & green Bell peppers aren't doing too hot either.  We got four or five stuffing-sized ones, but the rest are pretty sad looking.  The banana peppers, however, are going gangbusters.  Too bad I don't care much for them, they just don't seem to have much flavor to them.  Wonder what I can do with them?

Still no squash.  Wait, I stand corrected.  We harvested ONE yellow straight neck squash before the lone surviving plant died.  But it's not like we canned squash anyhow.  Squash and green beans are on the list for the Fall garden and hopefully they'll do better than the Spring garden.

Paul just started harvesting the jalapeno peppers today and  I'm going to try making Cowboy Candy out of them when we get enough. Basically it's a candied jalapeno pepper recipe.  I might even venture to try one if they aren't too spicy.  The recipe showed a little slice of candied pepper on a cracker with cream cheese and I have to admit that it did look tasty.

And now I'm hungry.  And I've got a craving for a PB & J sandwich.  Which I will have to eat with either grape, blackberry or apple cider jelly.  Because I still don't have any peach jam.

Ugh.  And now I realized that I don't have any bread.

Guess I know what I'm going to be making.

What have YOU been canning this weekend??? 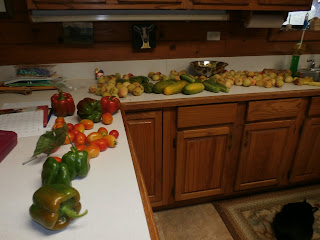