Did I tell you how much more peaceful it was once Paul butchered all those extra roosters?  I could actually go outside during the day an not be audibly assaulted by the crowing wars of testosterone-pumped poultry.  I could hear crickets.  It was wonderful.

But there was still the issue of the baby goats.  Even though the Boer kids have been shipped off the 4-H barn for the summer, we were still up to sixteen goats and the basically useless Nigerian mix kids were still hanging out here, drinking too much milk from their mothers, eating too many leaves off our fruit trees, and of late, one of them got on top of the car.  That was the final straw.  Paul butchered one of the wethers, but there were still two wethers and two doelings left.  I couldn't for the life of me sell even the doelings.

The goat market had basically bottomed out recently and there was no way we (meaning Paul) were going to drive them an hour and a half away to the sale barn, mess around with paperwork, unload them, then drive another hour and a half home for beans.  So I put them up for sale again in the local FB sale page for cheap and a guy came and got them the next day.  A guy who was going to take them right to the sale barn that night.  But I didn't care.  I hope he made some money.  I was just glad that they were gone.  Yes, we could have butchered them and put them in the freezer, but even that would have entailed more work (for Paul, that is).  Their chances for survival were better at the sale barn than they were here so I suppose I feel a little bit better about it. 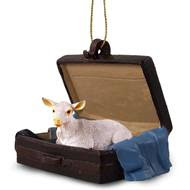 So now the goat yard is a much more peaceful, and much less crowded place to be.  That is until the end of September when we'll be getting back the four Boer kids....and bring us back up to sixteen goats again.
Posted by Carolyn at 9:57 PM