Several weeks ago, my daughter was digging around the goat / chicken yard with a stout stick as she is wont to do.  She usually digs up grubs or bugs or some other type of chicken "snackies" and feeds them to the biddies.

During on of her digging adventures, she was poking around a dead tree stump and found six tiny, leathery eggs:

Being the daughter of mine that she is, she wanted to keep them (instead of giving them to the chickens) and try to hatch "them" out......whatever "them" might be.

I was thinking it was some sort of small snake, so we put it in the terrarium with some of the rotted log material they were in, spritzed it with some water and waited.  Our wait didn't last very long because after about a week, I opened the lid to find a surprise.  Not snakes, but these incredibly adorable skinks: 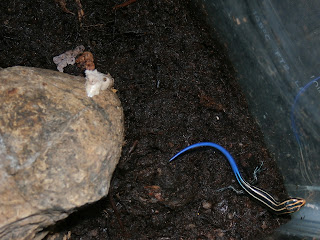 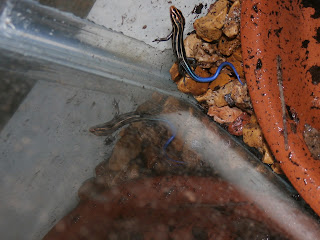 I was giddy with joy.  I didn't even think about them being anything other than snake eggs which is pretty silly since our homestead is crawling with skinks & lizards.

We kept them in the terrarium and fed them small insects, but I'm not totally sure if the skinks actually ate them or their food managed to crawl out of the enclosure or just up and died somewhere in the peat moss and gravel.  Since I never saw one of the skinks eat anything, we released them after a few days into a moist area next to the house hoping that they'd fair better in the wild than in the terrarium.  I saw a tiny skink a few days after we released them so I'll just pretend it was one of our hatchlings and they didn't get eaten by the chickens or the cats.

We also have two other cute nighttime visitors, except these guys aren't reptiles, but amphibians: 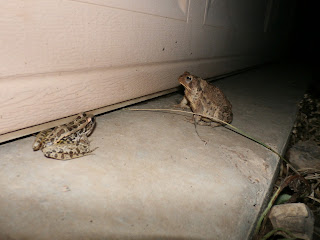 Toad Buddy has been hanging out under our front porch since last year.  I make sure to keep the lights on next to the garage at night (where he hangs out) in order to draw his meals into closer range. The leopard frog is a more recent visitor; he (she??) too hangs out by the garage door lights.

Rhiannon and I look forward to seeing our little amphibian buddies each night.  Do you have any wild buddies that hang out at your place?
Posted by Carolyn at 9:05 PM