I love the clean, crisp scent of fresh pine shavings.  We put the shavings in the pen for the Creepy Meat chicks and their substantially smaller Barred Rock brood-mates.  They are only a week and four days old today so it still smells like the shavings and not chicken poop.  I suspect in just a few weeks that I will be unable to smell the pine over the chicken poop.

If I recall correctly, last year I was cleaning out the pen every other day....and it probably could have used a cleaning EVERY day.  I don't plan on keeping them in the pen as long as I did last time, mainly because of the amount of labor involved in keeping the bedding relatively chicken-crap-free.

Once they're feathered out, I plan on putting the Creepy Meats out in the chain link kennel and then moving them into the fenced garden to pick at any greenery left after all the tomatoes and peppers are finished producing.  The drawback to putting them out in the kennel & garden is the fact that they will be vulnerable to raccoon and opossum attacks.  We've been lucky so far as in Charlie seems to be keeping most of the night time chicken murderers away from the hen house, but something has taken two older hens and three youngsters that refused to go into the coop at night.  I'm not sure if it is worth the risk putting them outside or not.  Nothing is worse than going out in the morning to a pen full of dead chickens.

There's another scent that has taken hold in the back section of the goat yard.  The gawd awful scent of a buck goat.  Herman is STANK-y.  Studly smells, but not nearly as bad.  Apparently he hasn't quite got his goat-mojo on, although Herman does have a few more years experience under his belt.

After being around the buck pen, it was enough to make me break the promise I made to myself not to indulge in ANYthing Pumpkin Spice'ish until the actual Autumnal Equinox.  I caved in and took a shower and used the fancy Pumpkin Spice bar of soap my Mom bought me a few weeks ago in order to erase all olfactory memories of the stanky-ass male goats.

Speaking of smelly stuff, I have some GOOD smelly stuff for my blogging buddies.  That is, if I still have any bloggers following me.  I've been a bad blogger as of late and haven't been reading yours or keeping up with mine.  So in an attempt to buy your loyalty back, I'm going to do a giveaway for some of the soaps Paul and I made a while back.

These soaps were made from all that pork fat we finally processed into lard a few months ago.  Normally I make our soaps using vegetable oils, but since we have lard coming out of our ears, I thought it would be a good idea to try using lard for the soap.  Well, and because I'm cheap.  The lard was "free"; the vegetable oils I'd have to buy.  We made the soap the first week of July, so they are ready to use.  We've been using them for weeks now and haven't burned our faces off, so don't worry, they're plenty cured!  I will say that the all-lard soap turned out much harder than the vegetable based soaps and they do not lather nearly as much.  I think I'll add some coconut oil in the next batch.

Anyways, these lard-based soaps are scented with sandalwood, lilac, orange and almond fragrance oils (as opposed to essential oils), so they're not ALL natural, but hey, it's free soap, right?! 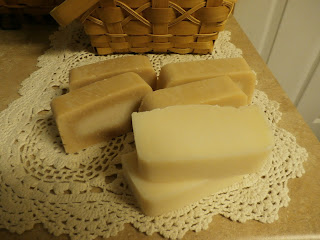 So if you're still reading my blog and wanting some homemade lard soap, just leave a comment here.

And here's the "Fine Print" for the contest:

Contest open to U.S. Residents only.

One entry per person, UNLESS you say something nice about cats.  Then you get two.  Entries.  Not cats.

Winning name(s) will be chosen by a scientifically credible procedure to ensure a purely random winner or winners (i.e. I put all your names on little scraps of paper, throw them in a kitchen bowl and have Rhiannon close her eyes and pick one out).

Contest ends on 9/27/15 at Midnight, or sometime around then.  Because it's my blog and I can do whatever I want.
Good luck & smell ya later!
Posted by Carolyn at 2:41 PM