Last year - or was it the year before - we finally put in a stock tank for the ever-increasing number of goats we have to provide water for.  It stayed relatively clean for a while and when the water level got low, I scrubbed it out & refilled it.  But the Sub-Tropical weather we had recently had been making the chore of cleaning it out more difficult.  Not to mention the fact that there have been mosquito larva and some sort of other weird swimmy bugs frequenting the tank.  Instead of trying to scoop out the larva / swimmy bugs / algae or dump the entire contents of the tank out, I thought I'd try something I've heard from other livestock owners that wouldn't cause me quite so much trouble.

Rhiannon has a fish tank in her bedroom.  We bought it, along with five tiny feeder goldfish about 2 1/2 years ago.  And since then the tank-to-fish ratio has shrunk.  The fish have grown into something one might actually consider filleting and frying up in a pan.  After consulting with Rhiannon about her feelings for the goldfish, we decided that we'd put two of the larger fish into the stock tank.

I topped off the tank with some fresh water and we unceremoniously dumped the fish into the tank and watched them swim around in their new home.  The goats came up to see what we were doing, not so much interested in the bright orange creatures now inhabiting their watering hole, but fixated on the simple fact that we were carrying a bucket.  Because in the mind of a goat, buckets can mean only one thing; grain.  They were disappointed. 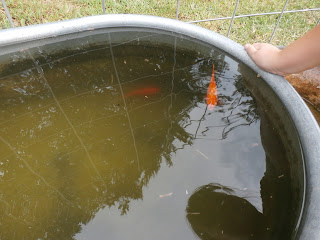 Come actual goat feeding time later in the day, we checked on the status of the fish.  I'd say "fishes" but as you all know, "fish" is the plural of "fish".  Except there was no "plural" to speak of.  It was just "fish".....as in ONE fish.  How the hell did I lose a fish in just two hours?  Of course, the different scenarios flooded my brain.

Did a heron find our newly-stocked buffet so quickly?  Would a raccoon be out at this time of the day?  Could our bird-brained chickens actually figure out how to catch one?  Did the goats slurp one up???  I looked around to see if there was a dead goat on the ground, asphyxiated by a pet fish stuck in her esophagus.  I was trying to think of anything else that could have caused a fish to be missing, but the bawling from the all-still-living herd of "We're STARVING to death" goats did not allow for much more quiet contemplation.  So Rhiannon and I clipped and fed everyone and then that's when I heard Rhiannon say "I found Bulgie!" (he has a bulging eye, hence the name).  Apparently he was in the grass about three feet from the stock tank and managed to get out of the tank - either by his own volition or "assisted" by some other animal....we'll never know.

Rhiannon put him back in the tank....where he dropped to the bottom....like a dead fish.  We waited a minute, then I told her to scoop him back out and throw him to the chickens.  Which were totally uninterested in.  So we went back to goat feeding chores and when everyone was unclipped, I went back to fish carcass to throw it into the compost heap.  I picked it up and was about to fling it over into the garden when it's gills moved.  Shit!  This thing had been out of the water twice now, the first time for nobody knows how long and the second time for about five minutes.  So I shove it back in the water & "swim" it back & forth to get some oxygen through it's gills.  It didn't seem like there was much progress, but it was progress.  So for about ten minutes I swam that stupid goldfish in the stock tank and it eventually flipped it's fins & tail a little, then eventually swam out of my hand under it's own power.

It's been four days since the Resurrection of Bulgie and I'm happy to say that he's still alive and clearing the tank of algae and bugs.
Posted by Carolyn at 12:22 PM