Little of This, Some of That

One thing always leads to another. This particular "one thing" started about three years ago.

During one of my "I can make that into jam / jelly" fits, I had started saving apple cores and some skins from the copious amounts of apples consumed by my daughter. (BTW, I cored them BEFORE she started chewing on them) They were saved in large zippy bags in the freezer until I had enough to make apple cider jelly. Unfortunately, several of the jars didn't jell up properly so we had a half dozen Apple Cider "Syrups" sitting in the pantry for the last two canning seasons. My daughter has been watching a lot of baking shows lately and loves to come up with new desserts. Her favorite concoction has been Apple Tacos, which are basically little fried pies, but baked. We had apples, and we had apple cider syrup, so away she went to making her dessert. It started with the apple cider syrup, fresh apple chunks and some oatmeal thrown in for good measure. That goo was then used for the Apple Taco filling. And filling, they were. But the filling-to-pie crust ratio was off and there was over a cup of the filling goo left. Not being one to let anything go to waste, I saved it from the chicken bucket and put in aside for "something" later. Yes, the frugal person of Polish heritage strikes again.

As I was drinking my second (or thriteenth, don't judge me) cup of hot tea, it occured to me that a scone would go wonderfully with my beverage. Hmmmm....what flavor scones could I make? Enter the extra apple filling.

I took the filling and added a duck egg, a bit of vegetable oil, milk, whole wheat and white flour and a big pinch of baking soda. Mixed it up until it looked good then slapped the scone'ish mass onto a greased baking sheet, scored it and popped it into the oven. 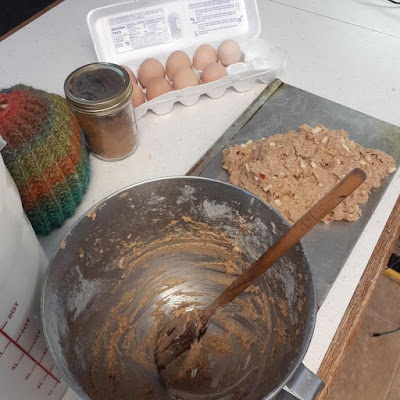 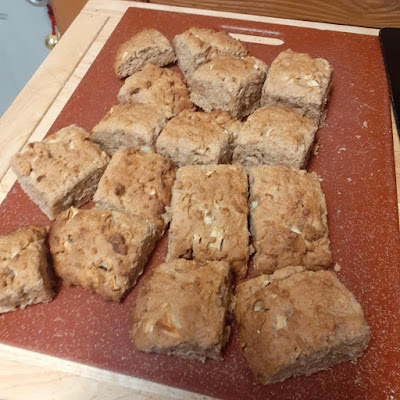 Please dont's ask me for the recipe, as I have no idea what I did. I have found out that after years of cooking (and burning, and ruining, and giving mistakes to the critters), that I have become "that woman" who just bakes and cooks without a recipe. In my younger years, it drove me totally bonkers when people would say "a pinch of this" or "until it looks good" or "season to taste". I would have seethed at me if I knew the older me when I was the younger me.