The entire Universe seemed to have a particulary cold spell last week (or was it the week before? I don't recall, I think my brain is still defrosting) and caused havoc for lots of people. It hit especially hard for those in areas where we are not used to sub-sub-sub-zero temperatures. For those of my readers who live, and even enjoy, the Arctic weather, I tip my hat to you. You truly are survivors (and possibly a bit cray-cray).

Our temperatures dipped to the negative two or three days during the night and didn't venture above single digits during the day. So when do you expect our goats decided to give birth? Yep. Twelve kids popped out during this time. Our older does had enough sense in their little noggins to go into the lean-to, but two others just plopped out their kids in the middle of the field. In the freezing cold snow.

We've dealt with hypothermic goats before, so (un)fortunately we pretty much know what to do. If the kids are somewhat coherent, we just bring them into the house and warm them up with a dryer. When their internal body temp is back up (around 101 degrees) they can be fed warm milk. It is imparative that their body temperature is normal before they are fed; it they have milk introduced into their stomach before this, they are unable to digest and end up dying. We found this out with our first hypothermic kid several years ago.

These years of (in)experience have given us the proper protocol for dealing with frozen goat kids. The two this year were found unresponsive and immediately brought in to warm up. The first doeling was able to warm up with just the hair dryer treatment, but the second buckling was well beyond that and he had to be submerged into a bucket of warm water for about an hour. It took almost all day to get his temperature up to even think of getting some warm milk into him. He was still kind'a out of it, but he needed nourishment as soon as possible so we tube-fed him until he was able to take the bottle. 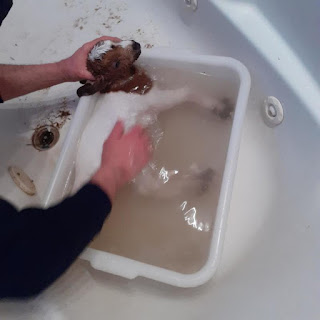 Both hypothermic goats are now being pampered by my daughter, along with a third buckling who we pulled from the dam as she doesn't seem interested in him (she's on the "sell" list, btw). So we have goats in the kitchen. I wish I could say that this is an unusual occurance; alas, it is not. 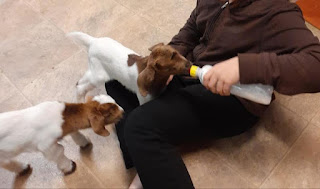 The other goats and Ms. Melman seemed to get through the cold spell without any harm. The chickens did not care for the snow at all and would not come out of their coop until Paul shoveled a path for them. The ducks didn't seem to mind the snow and would just bulldoze (duckdoze??) through the soft snowdrifts looking for a snack or a pail of warm water to muck up. Kai wasn't bothered much by the cold, but he did come in at night. The cats would venture outside for like fifteen seconds then loudly request to be let back inside, cursing me for being such a horrible cat-mom and demanding that I change the weather to the 80's. Penelope stayed tucked away in her little polar fleece lined burror for two days straight, but is already back to her at-dusk feeding schedule.

The wild birds flocked to our suet feeders and trays of warm water. There was quite a menagerie of feathered friends; bluebirds, tit mice (mouses??), juncos, cardinals, wrens, sparrows, downy woodpeckers, sapsuckers and nuthatches! I've never seen such a variety of birds at the feeders at one time!

Our weather outlook for the next ten days looks to be in the mid-50's and nothing lower than 32 at night so I think we're back to normal. I'm hoping to get out in the gardens this weekend and play in the dirt a little. I've already started some herbs inside and have to stick some tomato and pepper seeds into pots. Spring is coming in just twenty-three days! I just hope that Winter is done being a pissy-bitch and leaves quietly.
Posted by Carolyn at 11:00 AM