I haven't been the offical "Keeper of Goats" at the homestead for almost six years now. After re-establishing myself in the weekday 9-5 grind, the daily Care of the Caprines was no longer my responsibility. I don't recall how many goats we had when the Goat Baton was passed to Paul, but I swear it was no where near what we had last week. Specifically, thirty-nine goats. As in just one less than forty. As in, "Holy Crappers! Where in the hell did all these goats come from??" Well, when a mommy goat and a daddy goat love each other.......

We've been talking about thinning the herd for a few years now but it just never seemed to happen. Until last week: 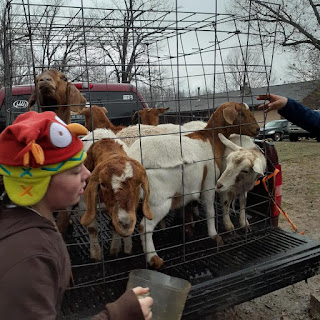 Two separate buyers releived us of twenty-seven goats. Not only do we not have to feed these goats any longer, but we ended up with a few extra dollars in our pockets. Not to say we actually MADE any money on them because as anyone who raises small-scale livestock painfully understands that you never, EVER make money, but we did not send the goats off without getting a little bit of green for the trouble.

Hopefully we will be visited by an additional buyer this week who will take a few more off our hands, leaving us with only MamaGoat, Cactus, Sunflower and the two bottle buckliings. MamaGoat is past her kidding years so she will live out her life here. Rhiannon was unwilling to give up Cactus and Sunflower as they were her bottle babies from last year and Cactus is pregnant; she wants to be with her for her first kidding. Sunflower is a little bit gangly and not really fit for breeding, so she's become a pet; she may eventually be sold if it's to another family as a pampered pet goat. And the two bottle bucklings will hopefully be sold as soon as possible.

Going out into the goat yard yesterday was still a bit eerie. Not being mobbed by them nor hearing the screams of "starving" goats whenever you make eye contact with them is taking a little getting used to. Wait, what's that racket now?? Oh yeah. We still have seven roosters. Five more than we need. Time for rooster stew.

And I've got a rooster story for you as well. Stay tuned!
Posted by Carolyn at 9:59 AM