Not that anyone really missed me (well, maybe one of my eight followers did……thanks for inflating my ego a bit).  I was on, dare I say, a VACATION!  Well, not like Margarita & white sandy beaches kind’a vacation, but still.  I got a killer deal on a flight back “home” and couldn’t pass it up.  So I went for a long weekend to visit my Dad, Sister & a few friends.
My flight was pretty much uneventful.  And when I exited the puddle-jumper at my destination I was greeted with a blast of freezing air and the smell of diesel exhaust.   Just a few of the things I DON’T miss.  Dad picked me up at the airport & drove the eleven miles to his house.  Which took an hour.  And it wasn’t snowing or rush hour.  Another thing I don’t miss.  I’ll have to keep this recent grid-lock event fresh in my mind so the next time I’m at one of the few stoplights in town here, I won’t get so cranky about it.
I spent most of the time at my Sister’s house and we did some shopping.  It snowed the night before our shopping trip & I had flash-backs about driving in the snow and how careless everyone seems to be after the first snow of the year.  We saw two or three near-misses on our short drive to the mall.
Well, we bought Mom’s present, walked around for a while and then treated ourselves to a soft hot pretzel and people watched for a while.  I don’t know why I keep forgetting, but it seems like even though there are a hundred stores in the mall, they are either jewelry stores, shoe stores, crappy toy stores or “hip” clothing stores featuring size 0 mannequins dressed in really raunchy outfits.  How many jewelry stores does one mall need?   Really?

But other than reminding myself exactly why I moved, I did get to see family, a good friend of mine, ate Polish & Mexican food, drooled / window shopped at the Polish grocery and oh yeah, shoveled snow.  At least it didn’t snow on my flight days. 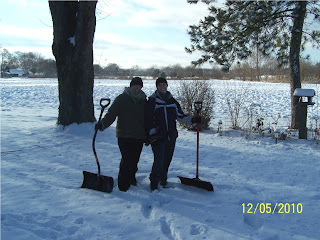 Flight home was also uneventful, although about an hour delayed.  Paul & Rhiannon picked me up at the airport & we went home.  The house wasn’t burned to the ground, the cats, dogs, goats, equines & chickens were all fine.  Not that I doubted Paul’s ability to take care of the house, but it just seems weird when I’m not taking care of things.  The only thing that was different for the animals was that I had Paul keep the goat kids on their dams the entire time so he wouldn’t have to milk in the mornings.  Normally I keep the kids locked up at night so I have milk in the morning.  Yesterday morning I was back to my normal routine and the morning milking was about ¾ of what it usually is, but today it was almost back to normal.  Not sure if it was because Paul wasn’t feeding them as much as I do or if the kids weren’t totally draining them.  Or it could be that they are just nearing the end of their milking cycle.
Anyhow…..it’s great to be back home.  I was getting homesick, even after only four days.  Although I DID get the most uninterrupted sleep I’ve had in like two years…..that was nice.
Miss you Dad & Christine, but there just is "No place like Home”.
Posted by Carolyn at 6:58 PM