I'm Dreaming of a White Christmas....

Well, not really.  It rained this morning, but if it were about 10 degrees cooler, it would have been a White Christmas (Eve).
Enough of the “Emergency Preps” for a while; I’ll get back to it after the holidays.
Have you finished your holiday “Emergency” preparations? We’re going over to my Mom’s house tomorrow for Christmas dinner so she’s the one doing most of the cooking.  If I’m lucky, I’ll be able to sneak a green bean casserole into her house.
I had finished my shopping earlier this month but it didn’t take very long as our family has taken a “no gifts for Christmas” vow several years back.  And it gets broken every year, but at least we’ve significantly toned the gift-giving extravaganza down.  Not that I want to seem like a scrooge or anything, but I’m trying very hard to keep gifts to Rhiannon at a minimum.  Or at least the toys.  I know it’s hard for a lot of people to NOT buy something for a child, especially those really neat-look’n toys, but she already has two boxes full and honestly, how many toys can you possibly have?  Oh, wait, I know.  A million.  My Dad would heap the gifts under the tree for us when we were kids.  Not that I’m discounting his sincere desire to make us happy with all the packages, but I can’t even recall but one or two really neat toys that stick in my mind (Petster & my StarWars AT-AT being the two).  I have a girlfriend that loves books as much (probably even more) than I do & she is constantly sending Rhiannon books, but I’m fine with that.  I’m hoping that next year Rhiannon will be old enough to go with me to The Ronald McDonald House and do some volunteering during the holidays.  I’m hoping that we’ll make it an annual event.

We’ve been able to do some work in the yard & barns this week thanks to Grandma’s awesome babysitting abilities.  I cleaned out the goat kid pens & chicken coop, got all hay “unsuitable” for the diva-goats out of the manger & cleaned that out.  It drives me insane to no end how much hay they waste.  At least I was able to use it as bedding in the little “mobile” goat huts.  I composted the chicken litter but the shavings/poop from the kid pen went right onto the garden beds – one nice thing about goat poop, it doesn’t have to be composted before you use it. 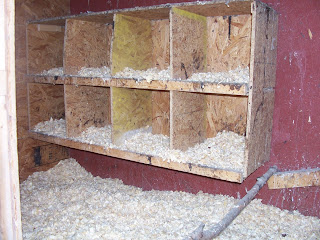 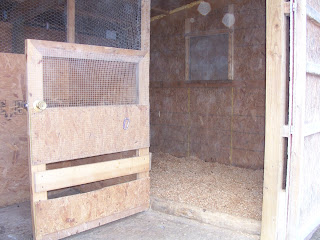 .....and fresh bedding in the kid's pen!
Paul also spent time sawing some of the downed trees so I can get back to splitting wood for the stove.  One day I’m going to have to figure out how much firewood we go through.  If I had to take a wild guess, I’d say two cords.  And that’s with me not keeping the house at 80 degrees all winter – I like it nice & toasty inside.  Paul claims that it’s so hot in here sometimes that he’s close to passing out. 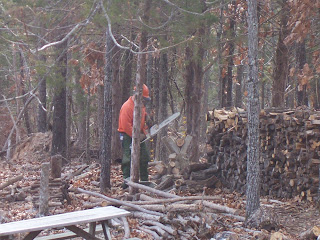 I also have our BOB’s (bug-out-bags) to go over.  I haven’t done that in over a year (bad, bad mommy, I know) so maybe I’ll use that as a blog subject next week.  And as a reminder for my other family members whom I’m almost certain have jettisoned the packs I made for their cars.  That’s a BIG hint Christine & Mom!

By the way, I did change out our storage drinking water.  And noticed that we only have three days’ worth – the minimum in my opinion.  I think I’m going to break the bank and buy some of those larger square water jugs from the grocery store since they stack so much nicer & hold more than an empty soda bottle.

Wishing everyone a wonderful Christmas Eve & Christmas Day!
Posted by Carolyn at 4:33 PM