What else Ya got up in there?

Nettie started in labor around 9 am.  She was being quite vocal, wandering around with that “dazed” look in her eyes and doing the archy-back thing.  So I let her walk around and stretch out in the goat yard for about fifteen minutes and put her back in the kidding pen so I could get my barn clothes on.  She didn’t start hard labor for another hour.  Grandma came over to watch Rhiannon so Paul could help me & take pictures.  Because I know you all want to see the birth of a baby goat.  Well, maybe not all of you, but if even one of you get to see or learn something new, then it’s worth it.
So here’s your final warning.  If you’re not into seeing goat bums up close, stretched nether regions and bloody placenta, come back tomorrow when I’ll just post the fluffy-cute-bouncy pictures of the goat babies.
Here’s Nettie starting to arch her back from early contractions.  Her back will slope down more and her tail will be held high.  She’s also lost her “plug” and the goo is hanging off her backend. 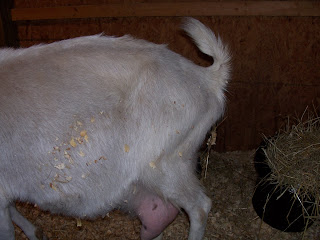 Contractions coming on harder now.  She laid down & she’s pushing in earnest. 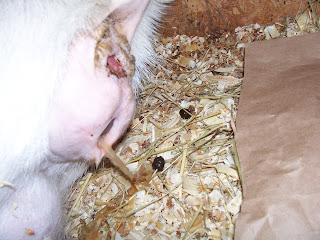 Here’s the “bubble”; the embryonic sac where the kid is.  This bubble got sucked back in once or twice between contractions.  You can kind of see the hoof in the mid/lower left side of the bubble – it’s a white smudge in the picture.  What you're hoping to see are two front hooves and a nose; meaning that the kid is positioned correctly. 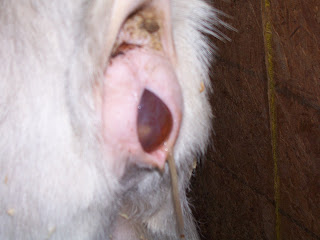 Kid number One.  The yellow / brown goo is meconium (first poop), sometimes the kids come out with it, sometimes they don’t.  I made sure to give the kid a good first cleaning to get rid of the meconium and clean out the nose & mouth before any could get in there. 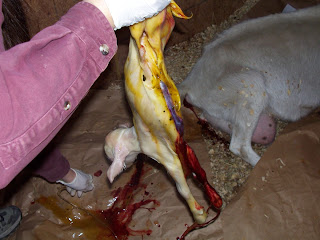 At this point I was ready to call it quits.  Nettie wasn’t big at all this year & I figured it was because she was only having one kid.  But just a few minutes later she started with contractions again.  I was hoping it was just the placenta, but it was another bubble! 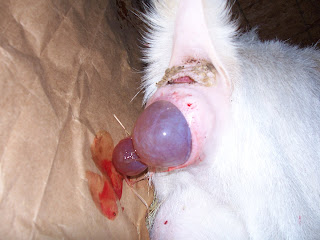 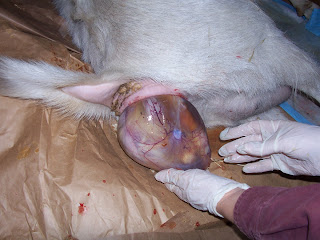 So I worked on cleaning & drying off the first kid while Paul started on the second kid.  Nettie was going back & forth from kid to kid, nuzzling & washing them, making Momma Goat sounds to them.  After only a few minutes, Nettie laid down and started grunting again!  How many kids did she have up there???
We didn’t get pictures of the third kid as we were still messing around with the other two.  Paul was closest so he would help this one.  At one point I looked over & said that something didn’t look right.  I saw hooves, but they looked funny; they were the back hooves!  This kid was being born breech.  But before I could even get excited or scared, the kid slid right out and Paul handed it to me for cleaning.
We dipped & tied all three cords, towel dried and fluffed each one up and made sure everyone was in a nursing mood. 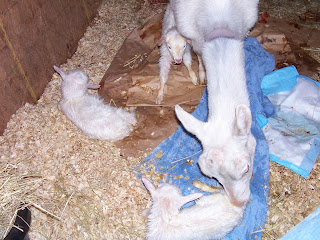 At one point Nettie made a grunting noise and I was afraid it was another kid, but it was the placenta.....finally! 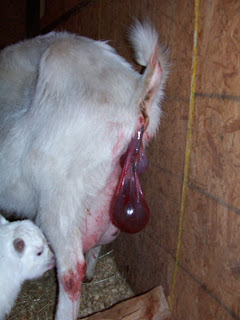 What a morning.  Oh.  And they are all does!
So Mom & the triplets are all in the barn and I’m sitting at the computer listening to the squeaky goat kid voices and sucking noises as they root around for breakfast.
Great job Nettie!
Posted by Carolyn at 1:55 PM