The Creepy Meats are getting bigger.  I actually had to go to the feed store and buy another bag of chick feed for them last week.  I contemplated just butchering them all instead of having to put more money out for feed, but I just couldn't do it.   I know I told Paul that we'd try for Cornish Hen sized chickens this time, but I just hate to think that they could be really big and juicy and yummy in just a few more weeks. 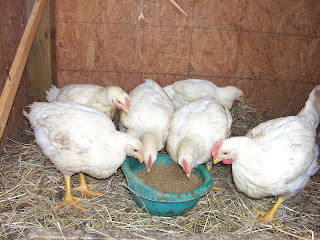 I may end up butchering three of the seven in the next few days though.  That way we'll get a (kinda biggish) Cornish Hen sized supper out of it and the rest of the food can go towards fattening the other Creepy birds for nice sized roasters.  I am not going to be buying another $14.50 forty-pound bag of food (really?  would it kill them to keep it in 50# bags?  I'd pay the difference, just stop trying to make it look like I'm getting a good deal when in all honesty you're just skimping on the weight of the bags....ugh!!) so once that's up, their time is up.

I may also just keep them all until this bag of feed is gone.  That way I can have an actual accounting of exactly what it cost in feed to get them to butchering size as well as a per pound of meat price.  Several years ago I'm pretty sure I kept track of how many bags of chicken feed we went through, but I never did figure out how much per pound the chickens cost us.  Although I DO know that it's a heck of a lot more expensive now.   Two years ago chick feed used to be $9.65 a bag and it's now $11.95 per bag.  Chicks were $1.08, now they're $1.69.

Rhiannon is still being pretty good at keeping care of them and she's past the "Oh, they're so cute!  Can I pick one up?" and has moved on to "Get away from me!!" because as any grower of Cornish Cross birds knows, at a certain age they start to attack anything or anyone resembling a source of food.  I figure it'll only be another week or so before she starts getting frightened and decides that they are much cuter on the supper plate.

Which is just fine with me.
Posted by Carolyn at 2:15 PM