Last fall, I had decided that I was going to try to can some of the meat birds we butchered instead of just stuffing them in the freezer.  Part of my reasoning was that canned meat stays just fine in a power outage.  If the power goes out, even though we have a generator, the food in the freezers are still at risk.

I has successfully canned chicken breasts and was happy with the results.  I've seen a few articles on canning chicken legs/thighs so figured it should be my next chicken-canning step.

Everything went well during the canning process and my bounty was put into the pantry downstairs.  Every once in a while I'd peek at the chicken shelf and wonder when I would ever try the legs.  I finally broke down a few days ago (mostly because I was too lazy to cook a "real" supper and Paul wasn't going to let me get off presenting him with a bowl of oatmeal).  We had a container full of leftover rice in the fridge from the night before so I made an impromptu chicken and rice meal.

First of all, let me say that the canned chicken legs / thighs are not very pretty looking.  Because of being cooked with the bones, the liquid turned into gelatin.
And don't even let me try to put into the words the strange noises it made as I used the spatula to scoop out the contents.  I heated the contents up until the gelatin was liquefied and attempted to pick the meat off the bones.  I say attempted because everything was very, very tender and a lot of the meat was just a squishy mess.

I strained the remaining broth and tiny meat pieces through a sieve and squished out the liquid.  This was made into a very tasty chicken gravy with just the addition of some milk & flour, the bones tossed in the compost heap and the mass of squishy chicken meat went to the very appreciative cats. 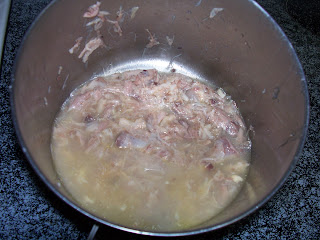 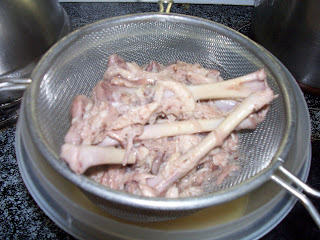 The meat I did manage to pick off in somewhat larger pieces was very tender and tasty, but best used in recipes calling for shredded chicken like maybe a BBQ sandwich, pot pie or in my case, plopped on top of a bed of rice and chicken gravy. 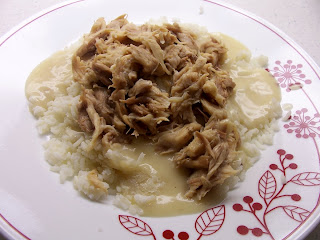 Although it didn't turn out as nice as I had hoped, I'm glad that I canned the legs & thighs (and thankful that I only have three more quart jars left in the pantry).  Now I know that when I can chicken, it will be breasts only.
Posted by Carolyn at 7:33 AM