In a weak-willed moment at the local nursery, I put a pack of these in my basket: 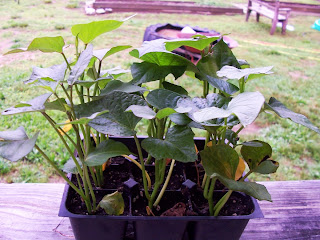 We love sweet potatoes.  Last year when they were on like super-sale (like 30 cents a pound or something), I bought a bunch of them and canned them.  They normally run around 88 cents per pound, and I'm too cheap to buy them when they are that high.

So when I saw the slips, I figured I should buy them - screw the grocery store!  Can you say "Impulse Shopper"?

But anyhow.  Now that I have them, what do I do with them?  Having only attempted growing normal potatoes once in my life and miserably failing at that, I cannot say that I have any idea what to do with white potatoes let alone sweet potatoes.  I'm pretty sure they kinda-sorta grow the same way, but I'm also pretty sure that there are differences in them.  The first being that you just don't throw a teeny-tiny sweet potato seed in the ground, you start with a slip.  But that's the extent of my sweet 'tater knowledge.

I'm off to do some internet searching on it, but since I'm always more prone to listen to those I actually know and might have some real experience, I'm hoping that you'll give me some pointers on how you grow yours.

Edited:  I must point out that we have NO soil so to speak.  We have rocks, clay and more rocks.  The garden beds that DO contain soil have been spoken for already so I'm hoping that maybe I can plant them in a bunch of wasted hay or "kind'a dirt" like regular potatoes.
Posted by Carolyn at 9:58 AM