Yesterday afternoon we got some REAL rain!

And some wind, and lots of lightning, and some big-sloppy-dog-run-uninvited-into-the-house because of the subsequent thunder.

It came fast and it came down hard.  Even though it was only about a half hour's worth, I was thrilled.  I have yet to get a rain gauge for the homestead but it's on the list for the next trip into town.  I can never rely on the local rain amounts as I honestly believe that there is a black hole of aridity that surrounds our homestead.  The last two times our area had rain, we got spit.  Heck, not even spit.  Like a dribble or drizzle or "did a bird just pee on me" kind'a rainfall.  I should still be happy when our general area gets rainfall (even though I just sit on my porch, staring up into the darkened sky, listening to the thunder and sobbing because we don't get any moisture out of it) because that means local hay production gets a little boost.  I just have to water the garden more.  Like every stinking day.  Sometimes twice a day.  But now I may actually get a day off from being a slave to the hose.

We even got some more light rain earlier this morning and the weather forecast gurus are predicting a 50% chance or rain for the next two days.  Whoo hoo! 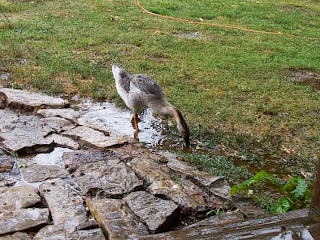 On another note, now that my old camera is back in kinda-service, any guesses on what kind of goose we have (see above picture)?  I'm thinking African, but that's just from pictures on the internet.  He now has a stripe going down the back of his neck,his feet changed from black to orange'ish and the feathers that are coming in look like they could be colored like an African goose.  Or s/he could just be a mutt.  Not that I really care.  As long as s/he isn't a jerk.  And if the goose is a peckerhead, well then, I've always wanted to have a Christmas goose.  Should be nice and plump by then.

Speaking of winter food, I was just this morning wondering exactly what the goose would be eating during our not-so-green periods of the year.  Right now the goose (no, we don't have a name for him yet) eats some of the chicken feed, but the majority of the day he's keeping my lawn trimmed.  What happens come winter when there's no greenery around?  Will he eat hay?  And do I have to introduce him to it beforehand just to make sure he'll actually eat it?  I'm not going to be running out to the grocery store to buy him romaine lettuce and spinach and I'm not going to be starting up a greenhouse just to grow him some grass.

Any goose-keepers want to chime in?  I'd appreciate it :)
Posted by Carolyn at 8:37 AM