Or in more brash wording, we had a goat three-some going on tonight.

This morning when I went out to milk, I found Nettie all dreamy-eyed and leaning up against the fence line where Herman is kept.  And normally they don't even bother wandering over to that side of the goat pen. 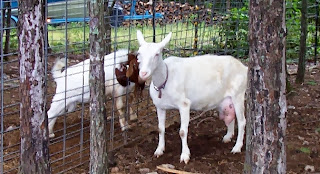 She's back in heat so obviously I didn't get her over to her chosen stud quick enough.  And I'm pretty sure that Herman has found his mojo as not only has he started peeing on his front legs and face, he's making those funky bucky noises.  Apparently his newfound bucky moves are turning Nettie on.  And assaulting my olfactory senses as well.

Anyhow, I ignored Nettie for the moment and got New Goat up in the stanchion to milk.  When I called to Annette for her turn she didn't come running as normal.  When one of my goats don't come crashing across the goat pen at hearing their name during feeding time, I know that something is up.  She was up against the fence, oogling over Herman as well.  Both does were tail-flagging a plenty and Annette was making funny half-grunting noises.

I called Paul at work, he set up another goat date night, and when he got home we went to putting two goats in the back of the truck instead of just one.
The last time we took Nettie over to Pilgrim's pad, the lady told me that when we pulled out of the driveway to leave, Pilgrim was wailing & wailing.  They could barely drag him back to his pen.  And he didn't stay in the pen long either.  She said that the found him running down the driveway and looking down the road we took to go home.

Once again, we pulled in the driveway and were greeted by Pilgrim who was chained to the telephone pole:
Breeding the does turned out to be much more difficult than usual.  But in the past, they were familiar with the buck they were being bred to and this time we were hauling their pretty little tails down a highway at 50 mph and up and around hilly terrain before we got to the buck's residence.  An unfamiliar buck's residence.  And although it seems that strange does are a turn on for the buck, strange bucks are not a turn on for the does.  But it did seem that we had two good connections for each doe so I left it at that.  Normally I like to see three good hits, but I figured that even a horny goat needs time to recharge his batteries and that any more time together would just result in more pushing & shoving and no additional swapping of DNA.
We hefted Nettie & Annette back in the truck and brought them back home just before nightfall.  I didn't even have to keep leads on them to bring them back in the goat pen, they high tailed it right to the gate and were practically pushing each other over to get back in.

But it seems that this caprine menage a trois was just too much for Pilgrim.  Because after we left this time, the owner said that they had to ask a neighbor for help getting him in his pen.  She said they had to basically hog tie him and drag him back to the barn.

I'm half expecting Pilgrim to walk up our driveway, pulling the chain and telephone pole behind him.  Just what I need......a goat stalker.
Posted by Carolyn at 9:43 PM