I've given up hunting

Had to do a reality check this past week.  I was hoping to get just one more squirrel to fill up the frying pan so I brought out the .22 when I saw one out back by the feeder.  Took my time, took aim, and missed.  Not once, not twice, but three times.  Squirrels ain't the brightest rodents around, and will often just jump a little bit when a shot goes off nearby, so my shots were actually on the same individual.

It was obviously time to do some practice shooting.

Paul set up some targets and I plinked away.  Did some adjusting on the sights.  Did some more plinking.  Adjust sights.  Plink.  And then when I was somewhat satisfied at my grouping, I stopped for the day.

I'm disappointed in myself.  There is no reason that I couldn't be practicing once a week.  And until I get a better, more consistent grouping on my targets, the squirrels and deer will be getting a reprieve (much to the relief of my mother). 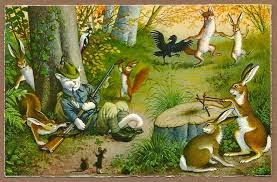 So.  When was the last time YOU practiced with your firearm(s)?  Are you confident enough to take that squirrel at 60 yards?  Are you sure that the shot you're about to take on that big buck is going to drop him right away, or will you have to track him down for hours, or worse, lose him to die a slow and painful death?

I don't want that to happen to me, so I'm off to practice some more.
Posted by Carolyn at 3:32 PM