About nine weeks ago we butchered our hog.  It wasn't a walk in the park, but it wasn't that difficult either.

Since we didn't have a meat saw (an electric one, that is) and didn't want to mess with the sawzall, we just boned the entire carcass.  We had boneless pork chops (i.e. pork loin), tenderloin and lots and lots of ground pork.

We also made our own bacon (go drool over OFG's recent bacon-making while you're at it) and cured our own hams.  Well, technically we are still curing our own hams.

When we butchered the hog, we boned the hams and I rubbed two of them with Morton's Sugar Cure, let them sit in a zippy-bag for two weeks, rubbed them down again with the cure, then let them sit for another three weeks.  Technically we let the hams sit in the cure longer than suggested, but that's how it happened; if you don't hear from me after I say we tried the hams, I'm probably dead. Two weeks ago we rubbed the cure off the hams, rinsed and soaked them for a few hours, then dried them off and put them back in the fridge sans zippy-bag for "equilibration"...., whatever that means.

Now all we have to do is dry cure them.  Which basically means wrapping the hams in paper and hanging them some place that's 70-85 degrees.  For up to six months.  Yes.  Six months.  In 70-85 degree temps.   Sounds like a rotted meat disaster just waiting to happen.  But we're going through with it anyhow.

When I took the hams out of the refrigerator, I gave them a good sniffing.  Smelled like meat.  Not, "I just killed this thing and it's still twitching" meat smell, nor a "Wow, did you pick this up in a ditch in the summer time?" kind of smell either.  Just a ham'ish, meat'ish kind of smell.  The outside of the hams were dry, but not crunchy-dry, just tacky.  Now I wish I would have left a thicker layer of fat on them.  Live & learn.
Anyways, after wrapping them hams in "Official Cured Ham Wrapping Paper" (i.e. brown paper grocery bags), we stuffed them in old orange "socks" and debated on exactly where we were going to hang these puppies.

I thought of hanging them from the dining room chandelier, but I didn't think the light fixture would have handled the load well.  Maybe under the kitchen cabinets?  Not unless I wanted to have to remove the cats from them every morning.  How about from the living room curtain rods?  Bet Martha Stuart never had Ham finials in her decor.

We finally settled on hanging them from the fireplace mantle, which made perfect sense.  The mantle is a huge honk'n piece of timber and it was high enough that the cats would have to actually exert themselves if they wanted to get to them.  So Paul got some screws and proceeded to screw them into the mantle.  When he was eyeballing where to put the screws I said to him, "Make sure they are centered on the mantle, I don't want it to look weird."

And he turned around and just stared at me.

Yeah.  We wouldn't want the huge raw chunks of pig flesh to be hanging off-center in front of our fireplace now would we?  Because that would just look.....weird. 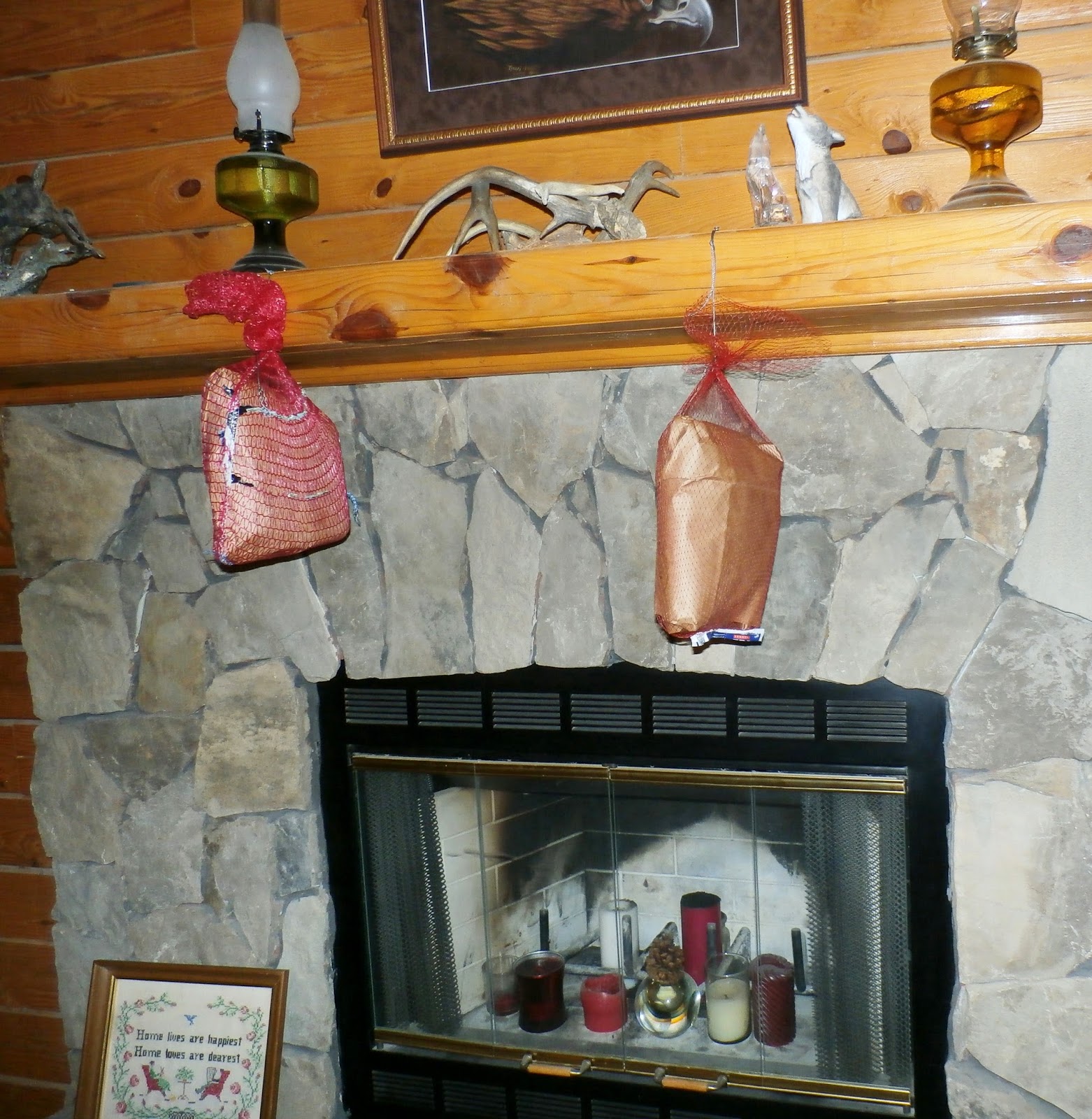 So now we just wait.  I doubt we're going to wait the entire six months because I'm worried that they'll dry out too much since they don't have the skin on them and the fact that it's really dry in here.  Winter is dry enough, but we heat with wood and it only averages between 40 - 45% humidity in the house.  Great for zapping people with static electricity, not so great for hanging hams.  I'm going to shoot for a two month hanging period.

Or until we get hungry and open up those puppies and fry them up.

Or until the cats manage to yank them down and eat them during the night.

Or until my Mom can't stand it any longer and makes me take them down.

Personally, I'd LOVE to see not only the hams, but an entire row of summer sausages and snack sticks hanging in my living room.  Who wouldn't want their fireplace mantle bedecked with deli deliciousness?!  Now that would be some yummy decor!
Posted by Carolyn at 3:12 PM