Well, the rooster is still alive

Just heard one of the roosters crowing.

I haven't checked on the rest of the outdoor animals yet though.  It's a nippy 2 degrees right now and other than dashing out onto the front porch to grab some wood for the stove,  I don't yet have the will to bundle up and go outside to see if anyone has frozen to the ground.  As soon as day breaks I'll put on my overalls, parka, wool socks, snow boots, ear muffs, woollen cap, ski mask and scarf and waddle out to the barn, probably  looking like Randy from "A Christmas Story". 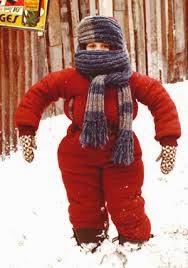 Of course, things could be worse.  I could still be living back in Illinois.  It's currently -9.8 without the windchill at my sister's place.  Sucks for you, Christine.

I fondly remember the winter weekday mornings, having to wake up at least an hour earlier to shovel the driveway.  Hoping that I remembered to plug in the truck the night before so it would crank over.  Driving the hour+ commute to work in the snow/slush and counting the number of fender benders or vehicles in the ditches while I could still see my breath inside the cab of the truck because the engine didn't heat up enough until half way through the drive.  Even when at work, in the confines of my toasty office, supplemented with warmth provided by one of those portable heaters, I couldn't get the chill out of my bones.  The drive home may or may not have been less hazardous, but rest assured, I would be greeted by a now-frozen three foot wave of snow/ice at the driveway entrance from the plow trucks going by during the day.

Ahhhh, the good old days.   Thankfully they are a distant memory.

And for those of you who still have to commute to & from work every day in this shit wintry mix?  I'm sorry.  I really, really am.

Although I'm no longer required to brave the icy highways and snow drifts every weekday morning, I still have a winter routine:

Start kettle for hot tea.  Fill 5-gallon bucket with warm water.  Bundle up (see previous description).  Open door to the bitter cold.  Curse the universe for the current axial tilt of the earth.  Carefully walk outside with the 5 gallon bucket of warm water, half of which has sloshed out of the bucket and on to my pant leg.  Enter goat / chicken pen, hoping to see signs of life.  After confirming no one is dead, start whacking at the stock tanks to chip out the ice.  Scatter frozen chunks of chicken feed to the chickens.  Fork over lots & lots of hay for the goats who are rushing you hoping that they will get grain instead.  Grab now empty bucket, go back inside to refill, then trudge out again where there is now a line of goats wanting warm water and will now refuse to drink out of the stock tank.  Sit down at computer and blog about how cold it is while sipping hot tea.

Depending on how cold it is, I'll repeat the above scenario at least two other times.

I guess I shouldn't complain too much.  I really have it better than a lot of people.  I don't have to walk very far to the barn.  We have hot water in the house.  And as Tammy pointed out just this morning on her blog, we have indoor plumbing.  I used to think chamber pots were disgusting, but believe you me, if I had to pee in the middle of the night and it was 2 degrees outside, I'd be using one of those puppies. 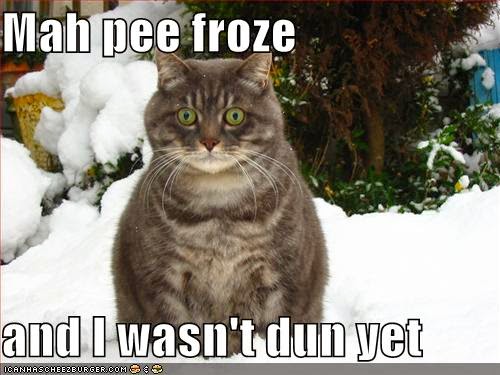 So, my fellow frigid bloggers, take care today and through this cold snap.....even if your "cold" is only down to the 40's you bastards.
Posted by Carolyn at 6:47 AM