Wow, where has everybody been?  Oh, wait, that would ME that has been missing from the blogosphere lately.  But I had a great excuse….my Sister & her husband were here visiting for the week!  Although I did take a few minutes to make a post a few days ago only to find that Blogger was out of commission.  So I’m back now, and I’ll make it up to you, but you’ll have to check back tomorrow.  How’s that for building excitement?
About a month ago, I noticed one of the Barred Rock hens was acting kind’a mopey.  I made sure she was getting to the food and water, and to my surprise, even though she was feeling down, she still kept her high rank in the pecking order.
I did some research on chicken illnesses and couldn’t really nail down what it could be or even rule out what it wasn’t.  Chickens aren’t the best patients and tend to downplay their sickness; not to mention the fact that the little biddies can’t actually tell you what’s ailing them.
After a few weeks I caught her again and noticed that she was really, really heavy and her abdomen was hard and distended.  Did some more research and figured she was egg bound.  This kind of made sense now; we had been getting a ginormous egg every few days from somebody, and lately we hadn’t.  So I’m assuming it was the sick chicken that was laying the huge egg and that she was now unable to pass them.  So basically, they were just kind’a collecting inside her.  Not exactly sure what happens to them while they are still in there, maybe reabsorbed to some degree, but it’s still not a good prognosis. 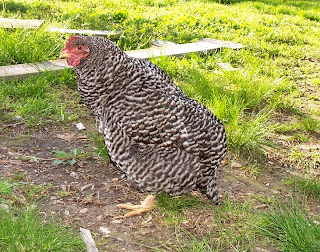 Egg bound hen.
So I do what any good keeper-of-chickens does; grab the chicken book with detailed pictures of the chicken anatomy, a pair of rubber gloves and the bottle of lubricant from the goat kidding box.  I won’t go into detail……you can all use your imagination this time.
My brief foray into chicken proctology didn’t yield any noticeable results.
She continued her lethargic existence and I readily admit to bringing her milk and special kitchen scraps in an attempt to make her (or me) feel better.  Once or twice I mustered up the courage to putting her down as to end her suffering, but it seemed every time I went out there with that idea, she’d be stretched out in the sun or just sitting there picking at bugs that passed by.  Wouldn’t I want to enjoy a few last bugs or hour in the sun before I left this world?  I know, I know, chickens aren’t contemplating such things as the afterlife and the teachings of the Buddha or Jesus.  But still.
One morning last week, I went out to open up the chickens and do barn chores and she was on the ground, dead.  I knew it was coming, but it was still sad to see.
As the circle of life continues here on the farm, one of my Sister’s Silky hens hatched out a chick!  She went broody last month ago so I let her set on three eggs.  I was hoping to have her set on a few more, but she didn’t lay any more and she didn’t want the standard sized eggs.  So over the course of the twenty-one day incubation period, one egg disappeared and on egg was a dud so there was only egg left.  On what I was guessing as the day before hatching, I picked up her lonely egg and held it to my ear….and it was peeping!
The next morning I went to check on the hen and her egg and I was greeted by a really pissy, fluffed-out momma Silkie and a teeny-tiny peeping chick. 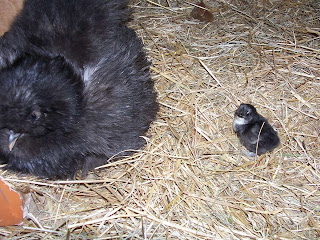 Mom and chick are doing fine and will have the entire brooding stall to themselves for the next couple of months until I figure what I’m going to do with her, the chick and the other three Silkies.  I haven’t let them out of the barn since we first brought them home because I was afraid they would just be pecked to death from our older, larger flock or become a chicken nugget snack for a passing hawk.  I suppose that they’ll end up in the chicken tractor until I make a more permanent coop for them.
I’ve been meaning to make a brooding / hatching coop so we can keep breeding our own chickens.  The Silkie acquisitions were the first step as I was hoping to use them as broody hens for the larger breed eggs.  But the Silkie hens are so tiny that I couldn’t see putting more than three standard sized eggs under her.  I may have to eventually buy some other breed of chicken that has a better chance of going broody in order to get a decent number of hatchings.
Just another thing to add to the list.  And one more thing for Paul to complain about.
And don’t forget to tune in tomorrow; I’m having a Chicken Book giveaway!
Posted by Carolyn at 12:31 PM