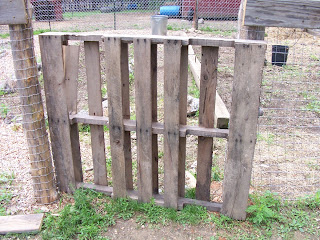 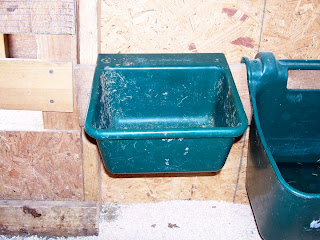 Pretty normal, innocent looking, farmish kind of objects, aren’t they?
But both of these relatively harmless looking objects have recently become the center of potentially life threating situations.
Our goat herd is contained using cattle panels for fencing, which means the smaller kids can easily go in and out of the area.  Not the ideal type of fencing for little goats, but that’s what we have right now.  Anyways, one afternoon I heard one of the kids bawling, which isn’t anything out of the ordinary.  Except that the bawling went on for several minutes straight.  So I go outside to investigate and find that a kid had wedged herself in between the boards of a wood pallet.  The pallet had been leaning up against the garden entrance as a temporary gate and had been knocked down….probably by the same goat stuck in said pallet.
I didn’t think either of her hind legs were in such a position that they were in danger of being broken, so I tried to ease her out of the pallet.  Of course she struggled like a crazy-goat-kid, screaming the entire time, so I had to stop and reevaluate the situation.  I tried to pull up the board with a pry bar, but I wasn’t strong enough to pop the nails out.  I went into the garage and grabbed the little cordless trim saw.  I was able to cut one side out, but I wasn’t able to safely cut the other side without the possibility of cutting into her back leg.  So there she sat, bawling even more because of the noisy saw, all the fussing and my constant cussing.
What I needed was a strong pair of hands to help me pry the board off.  But Paul was at work as were my neighbors.  I did, however, have my wonderful brother-in-law just down the road!  So I called him up and in just a few minutes he was here flexing his biceps and got the board off and the goat free.  She jumped right out, kind’a gave me a nasty goat-look, and ran right to mom for a snack.
During routine goat /chicken rounds yesterday afternoon, I went into the kidding pen, where I’ve also been keeping three of Christine’s Silky chickens.  The kids were out of the pen for the day, but the chickens stay in there all the time.  I went in to give them some fresh water and counted not three, but two chickens…..there should be two roosters and a hen.  Oh great, I think to myself, some raccoon or opossum or snake got in here and had an afternoon snack of a chicken.  And of course, it had to be the hen and not one of the annoying roosters.  So I look around for any tell-tale signs of a chicken struggle or chicken feathers / parts, but find nothing.  I sigh and tell myself that it’s my fault for not having a more secure chicken run.  I finish filling the water and feed trays and pick up a goat food bucket in the corner to return it to its proper place on the wall.
And when I pick up the overturned feed bucket, out pops the missing hen!  She was kind of wet, probably from being underneath that bucket for several hours, but otherwise unharmed.  Luckily it wasn’t a very warm day yesterday otherwise she could have cooked under there.
Two close-calls because of improperly attached items.  And I know it’s hard to do, especially when there seems to be farm junk, equipment and tools everywhere, but hopefully I’ll be more careful about those in-plain-sight dangers around the homestead.
PS – I’m not ignoring comments you guys have made, or ignoring your blogs, but am STILL unable to post comments!
Posted by Carolyn at 1:10 PM