Well, they are gone.

I decided to give up Jake & Elwood, the wild turkey poults.  I was going back & forth on an almost hourly basis on if I should keep them or not.  I really did want a few turkeys for the Holidays this year, but I don't think I could bring myself to eat these guys.  I felt that divine intervention took at least a small part in their rescue from the brush hog and that they should live out their lives without having to worry about ending up as the main course at Holiday meal.

Although that could have happened here (the living out their lives in relative safety), I made the decision to give them away to another farm.  Honestly, I don't need another critter to take care of.  And although it wouldn't be that much more work, it all seems to just keep adding up.  And the farm they went to has other wild and domestic turkeys, so they won't have to worry about being the "odd poultry out" as they would be here.

I admit that I already kind'a miss them.  They were definitely more needy than any chickens I've hatched, so that made me feel a little more "special".  I'd bring them out from the brooder several times a day for a little poultry play time with Rhiannon, which both parties did seem to enjoy.  We had them outside for a while, but they took to freedom a bit too quickly (by refusing to come out from under the porch for quite some time) so outdoor time was limited to the kiddie pool (sans water, of course). 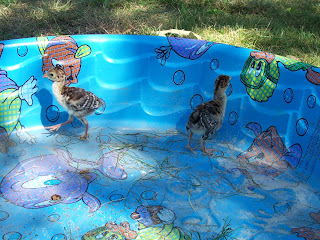 I hope they enjoy their new, vastly more social life.  And who knows, if Jake and Elwood turn out to be Jane and Elwood, maybe I can score a couple of their eggs one day and start up our own little wild turkey flock in the future (didn't I just say I didn't need any more work???).

We also had another set of feathered friends leave the farm this week.    I noticed that the Phoebe parents weren't hanging out (and pooping) around the porch and when I went to look in the nest, the babies were gone.  I checked my dates on when they hatched, so the timing was about right for them to fledge.  Although I suppose something could have eaten them (I caught a black snake eating their nest of newborns two years ago), we'll just stick with the story that they flew off and started their new bird life.  We've had the same Phoebe's come back to nest here for the past seven years.  I wonder if their offspring will come back to nest or if they are territorial and the parents won't let them nest here.

Now that they are gone, I guess it's about time I scrubbed the poop off the porch.
Posted by Carolyn at 10:52 AM