Why I hate Chickens, Part 2

They tear up the gardens. I haven't had a single tulip pop up in years.  What the squirrels haven't dug up, the chickens immediately start scratching around when the leaves poke through the ground.   I planted a dozen each lilies and tulips, a handful of hyacinth, crocus and mums in the front flower garden.  Almost every one has been scratched to oblivian by their raptor-like claws.  Whoever said that you can garden with chickens is lying through their teeth.

My raised beds are completely useless.  The second I plant something in there and turn my back, the buggers are in there scratching around and looking for what they can eat.  We could use the raised beds in the winter and early spring when we had plastic covering the hoops, but now that the weather is like a billion degrees, the plastic had to come off.  This uncovering of the beds obviously signaled that the chicken salad buffet had officially opened.  I'll have to get some sort of light fabric or bird netting if I'm ever going to be able to use those beds again.

Even where we DO have a garden fenced off, the chickens will manage to flap their way up and over the 4' fence in order to dine on the berries and newly emerged succulent sprouts which you will never see a pea, bean or cucumber from.  I did manage to clip almost every wing in order to stop the berry-garden carnage, but obviously I missed at least one because I've had to chase it out of the garden half a dozen times.  You know, after it had been in there long enough to lay waste to my blueberries.

The also leave little booby traps for me. The dig holes in the dirt / wood chips for their dust baths -conveniently located directly in the middle of the path to the barn - ensuring a twisted ankle at least every other week.

Don't leave gathered seeds in a bowl, even for three seconds as chickens will automatically assume you have collected all those heirloom spinach seeds for their mid-morning snack.

Oh, and did I mention that I have another two hens gone broody on me?  Neither of which actually have any eggs under them.  I haven't decided if I'm going to continue flinging gently carrying them out of the coop or just collect some eggs and see if they'll hatch some chicks out.  I can't see the brooding going well as it got up to 100 degrees this weekend and it's supposed to be just as hot this week.

Then there's the Poop.  Oh my gawd, the poop.  On the porch.  On the patio furniture.  In the front yard.  On the goats - yes, on the goats.  Although Rhiannon has become somewhat of an expert at avoiding chicken landmines, there is still the occasional overlooked turd and she will come to Mom-Mom to scrape it off her shoe or foot. 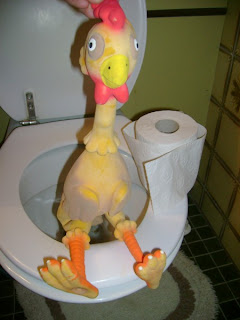 Chicken excrement will take the finish off a car.  It will permenantly etch the industrial floor paint on a concrete patio. Although many a gardener will praise the nitrogen-rich benefits of composted chicken poop, I'm surprised that the Department of Defense hasn't used this stuff in some sort of biological weapon.
Posted by Carolyn at 6:21 AM