I wasn't sure if I was going to share this with you because it doesn't have a very happy ending, but I couldn't help it.

Yesterday morning on my way to feed / water Ms. Melman & Nugget, I saw this poor thing caught up in the neighbor's fence: 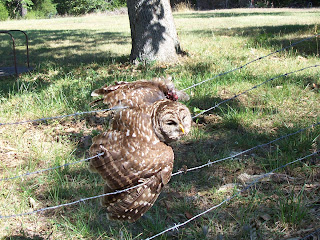 I rushed back  home, told Paul to grab wire snips, gauntlet gloves and the cat carrier and we came back to try and get him out of the wire.

Not once did the owl flinch or kick or move.  I was kind of expecting a lot of biting and clawing but he was obviously so drained from being in there he was just too exhausted to put a fight.

We got him out, but couldn't get the barbed wire out of his legs and wing without tearing more flesh, so just snipped off the pieces to get him free.  One of the local Vets takes care of injured wildlife so I called ahead of time to warn them we were coming in with an injure Barred Owl. 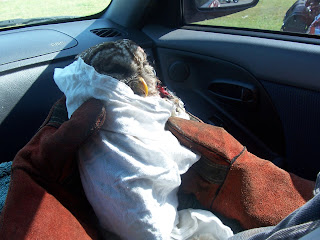 The vet took the owl from us and we went back home to our regularly scheduled day.  I called the vet's office a few hours later and they said that they had to put him down.  There were just too many wounds and they weren't even sure he would have made it out of the surgery.

I felt terrible when I heard the news, although I was half-expecting that outcome.  And of course, I've been kicking myself in the pants, saying that if I had been up earlier I would have found him sooner and maybe he would have had a better chance.  I know, it's not my fault, but it still sucks.  I guess I should focus on the fact that I did find him and he didn't have to sit there in the sun all day and suffer a slow death from heat exhaustion (it was a hot one yesterday).

Ironically, this little guy would have grown up to be a potential eater of my chickens.  And even though I just rambled on about how many creatures I killed in my last post, I have a soft spot for some animals.  Even if they do have a liking for free-ranging home-grown chicken.
Posted by Carolyn at 1:39 PM