I attempted two incubator hatchings this year, together totaling over ninety eggs. Out of those, I only had one live hatch.  It was a bummer of a chick-raising season.

Earlier this year, I had a hen set on eggs underneath the shed and she hatched out our lonely Easter Chick.  Which just so happens to be a rooster.  And a colossal pecker-head at that.  It's only a matter of time before he graces our supper plates.

About a month ago, I had another hen go broody on me.  No matter what she did, I couldn't get her off the nest so I gathered nine decent looking eggs and let her at 'em.  The weather has been insanely hot - like in 100 degrees or darned close to it for the past three or even four weeks.  Because of the scorching heat I didn't expect any of the eggs to survive the inevitable slow-cooking.  I figured after several weeks of unproductive setting, the hen would finally realize that nothing was going to happen and she'd break the nest up or she's just get too danged hot and leave to cool off in the dirt under the shed.

Well, yesterday when I was milking, I heard the broody hen doing the mother-hen-clucking-noises.  I can't describe it, but if you have chickens and you've had them hatch chicks, you know what I mean.  If you don't have chickens or if you haven't had the privledge of one raise chicks for you......well, you'll just have to trust me that once you hear that particular "clucking", you immediately know that there's a chick somewhere under that puffed up and pissed off bunch of feathers.

I quickly finished milking, ran inside to process the milk then ran back outside and opened the empty kidding pen (where the broody decided to set).  I was greeted by a clucking, puffed up and "I'll peck your eye out if you come any closer" chicken.  And I heard peeping!

Luckily, this hen is all cluck and no bite.  She let me lift her off the nest and I saw one dry and fluffed chick, one half-way out of the shell and three other eggs with chicks cracking around the shell! 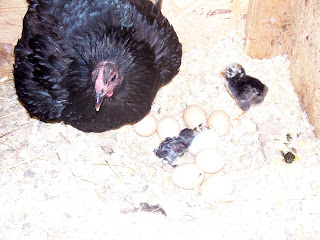 As of this morning, there are three fluffy chicks, one chick just about to pop out of the shell and still one continuing it's pecking to free itself.  I haven't candled the other four eggs but may do so in a few hours to see if there are any more chicks.  If not, I'll take them out of the nest and dispose of them so the mother hen can get on with the business of raising her little brood.
Posted by Carolyn at 6:53 AM