Well, our hay is finally at the house. 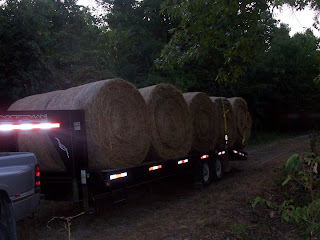 And although I know I should be doing a happy dance for the fact that we're set for the year in hay, there were a few "snafus" in the acquisition.  One of them being a hundred dollar snafu.

The first six bales we got from the first cutting were $40, and it was really good green hay.  The next load was supposed to be river bottom hay.  When I talked to the hay guy a little over a week ago, these bales were going to be $50, which was fine by me because river bottom is usually of a better quality.

Well, Paul called me from where he was meeting the hay guy to load up the trailer and says that it's not fifty bucks a bale, but sixty bucks.  I say, fine, just get it on the trailer.  Right now I'm feeling lucky we even got this load.  But a extra hundred bucks gone, just like that.

Well, he comes home and brings me a sample of the hay in his hand.  It is most definitely not what I was expecting, not nearly as nice as our first load and not nearly as heavy.  They apparently waited too long to cut and although it isn't the crappiest hay I've seen, it's not what I had hoped for.

I know that I sound like an ungrateful bugger. I should be thrilled that we have our year's supply of hay when there will be people scrambling around in the next few months in almost-crazed desperation.  Another blogging buddy mentioned that the big hay dealer just up north of us is O.U.T. of hay.  I've never known them to be out of hay.  And our local feed store said that they've been selling it as soon as it hits their driveway and they have no idea when additional shipments will be in, what they will be getting or how much it's going to cost.

I though that last year was a bad hay year, but this year is turning out to be even worse.
Posted by Carolyn at 9:53 AM