At least it's not "Pickles the House Goat". 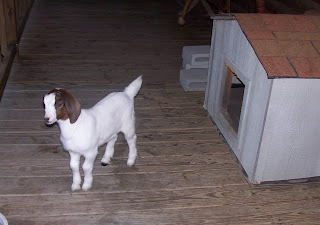 I did have her inside two or three times the first few days because of the extreme heat, but other than that, Pickles has been an outdoor goat.  One the porch, but still an outdoor goat.

I've never raised a bottle baby and I do have to admit that she is much friendlier than the dam-raised kids.  Not that the other kids are mean or overly timid, but it takes longer for the kids raised by their mothers to warm up to us.  Pickles, on the other hand, is like a puppy and follows us everywhere.  So she's been hanging out on the porch.  And banging on the front door to come inside.  And jumping on, head butting and otherwise annoying poor Moonshine to the point where she'll be begging to come inside just to get away from Pickles.

But I don't want a porch goat.  And we need Pickles to get used to living with the other goats.  So I've been taking her out to the goat pen for her feedings.  She's been staying with the other goats for longer periods of time although she's still sleeping in the dog house on the porch at night.  Nettie, Annette and Chop Suey were picking on her at first, but nothing that really warranted a human intervention. Eventually the older goats figured out that the little annoying goat wasn't going away and got bored of harassing her. During a (very short and light) period of rain, Nettie actually let Pickles stay with her in one of the goat huts.

Pickles is also eating like crazy.  I think she's going through an entire half-gallon every 24 hours.  Thank goodness Nettie and Annette are in milk otherwise I'd hate to find out how much milk replacer would cost us.  She's also much beefier than I remember the dairy kids being at two and a half weeks, which would make sense as she's a Boer goat.

As soon as I get the door back on the kidding pen, she'll spend the nights out in the barn with the rest of the goats and her days of porch-lounging will be just a distant memory.

And Moonshine will be much happier.
Posted by Carolyn at 6:29 AM