There's been a black stray cat frequenting our homestead for about six months now.  And of course, as soon as I noticed him hanging around I started feeding him.  I just couldn't help it; the poor bugger was eating the chicken scratch that was left over in the bowls after the chickens were put up for the night.  How hungry would a cat have to be before it eats chicken scratch?!

I started putting out dry cat food by the chicken food at night and calling "Meow-meow-meow-kitty" like any good crazy-cat-lady would and eventually he would come trotting up for his supper.  My plan was to get him nearer and nearer the barn so he would take up residence there.  I've been having a horrible time keeping the mice population under control and thought a real barn cat would prove to be most beneficial.

One night about a month ago, I went out to close up the goats/chickens and feed Outdoor Kitty and he came hobbling up, meowing piteously.  Sometime during the last 24 hours he apparently hurt his front right leg and was now having to walk on three legs.  Man, I wanted to sob.  As I still couldn't get more than five feet from him, all I could do was look for any flesh wounds or obvious signs of broken bones, but didn't see anything, not even a patch of missing fur.  The next three nights I put out a live trap and a can of stinky cat food in the trap.  I figured eventually he wouldn't be able to resist the smelly/fishy can or get hungry enough and venture into the trap.  He never went for it, so I finally gave in and just put food out for him.  I was hoping to get him to the vet not only have his leg looked after but get him neutered and rabies shots administered.  But that never happened.  His leg / foot finally seemed to heal and he's getting around on all fours now with just a slight limp when he puts weight on the front paw.

The past several weeks I've been getting his food dish closer & closer to the barn.  This would have been worlds easier if Nettie didn't hate Outdoor Kitty.  She stomps her front feet and charges him if he comes into the goat pen.  He still goes in there, but has to give Nettie a wide berth.  Once he's underneath the barn he's fine and spends quite a lot of time under there.  For a week now I've been feeding him while Nettie is busy munching on fresh hay or is locked in the milk stand eating grain so was able to put his food in the barn and he'll come up and eat.  Oh.  And I've been putting fresh-from-the-goat milk in his dish, so now he meows whenever I go near the milk parlor, hoping he'll get a dish of warm milk.

I've been moving his dish from the front barn doors, to the front of the kidding pen door, to inside the kidding pen with the door half open.  Then three days ago, I put his food dish farther in the pen and closed the door behind him.  He wasn't happy, but at least he wasn't batshitcrazy like the last feral barnkitty I attempted to lock in the barn.  He tried to climb out, but I had days before secured all escape routes with chicken wire or boards.  I also put a litter box in there and a box with some old towels in the corner for him to sleep in.  He's been in there since then and I've been spending some time in the pen with him, just trying to reassure him that I'm really a nice person (even though I've basically locked him up in a 6' x 10' box).  He cowers into his box when I come in to feed him and meows that pathetic mooowwrrrrr for a bit, but then just sits and glares at me with those pumpkin-orange eyes.  I'm hoping he'll eventually come around and let me pet him. 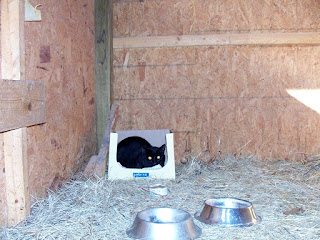 My ultimate goal is to get him comfortable and friendly enough that I'll be able to open a small door for him to come and go as he pleases.  I'll keep his bed, litter box and food in the barn hoping he'll find those accommodations more pleasant than sleeping outside, especially given the cold winter temperatures.  And all I ask is that he snags a mouse or two while he's in the barn.

Who would have thought that getting a barn cat would be so difficult.
Posted by Carolyn at 8:54 PM