It's time to update your wardrobe....

....when your teapot is better dressed than you are: 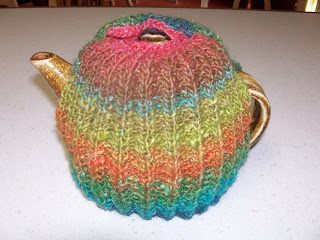 I received this teapot cozy from a dear friend.  Aren't those the most beautiful colors?  And although I at first wondered about the actual functionality of the cozy, I was convinced that it was both form and function as when I went to grasp the handle, it was hot!  Normally the handle is just lukewarm, so the cozy obviously is doing it's job.

Feeling a bit grubby and lazy in my sweatpants and probably-should-be-made-into-rags sweatshirt, I decided to put on a pair of jeans without poop or mud on a nice pair of jeans and a newer fuzzy sweater.

Since I live on a farm, I tend to neglect my appearance and wardrobe.  The only two humans that see me on a daily basis are Rhiannon and Paul.  Rhiannon thinks just putting her pants on in the morning is more than adequate and unless I'm wearing a SpongeBob or dinosaur shirt she could care less what I wore.  And Paul is away from the house ten hours of the day so what's the point of getting spiffied up?  Even though I may not be leaving the homestead, I should really make sure I'm not dressing like one of those Wal-Mart crazies.  On more than one occasion I've been surprised by either the delivery man or a "turn-around" while outside tending to the animals.....in my pajamas or sweatpants/shirt and lacking a certain upper body support system.

So I think that one of my New Year's Resolutions will be to be more presentable.  It's not like I have to go out and buy clothes, I just have to take a few minutes and dig through my closet.  Hopefully I'll be able to fit in those old pants.

If you're having trouble fitting into your "skinny pants", consider coming over to Twinkies and Treadmills.  There are already several of us over there providing encouragement and entertainment, so if you'd like to join us, just let me know!
Posted by Carolyn at 5:12 AM