The Dog with Two Mommies

Wallace still visits us every so often and he's been looking pretty fine.  His coat is much smoother and fuller and he has put on a few needed pounds.  (You can read about Wallace here and here.)

He had come to visit Thursday night.  It was such a nice night out I left Moonshine outside with him and they cozied up to each other on the front porch.  He was still here on Friday morning and he followed me around while I did barn chores.  Although I haven't seen him actually attack a chicken, if one of them just so happens to run in front of him, he'll give chase and I have to yell at him.  He also freaks the goats out, although I really don't fear for their lives as I think Nettie would give him a good what-for.

So I finally got the number of the rabies tag he had on and the Vet's office that did the shots.  I called the office and explained that I needed to get a hold of the owner of Wallace.  I explained that although he was a very, very nice dog, he was starting to take a liking to our livestock.  I also threw in that a responsible pet owner shouldn't let their animal roam free at will, which seems to be the case as he visits us quite often.  They wouldn't give me the owner's name (which I suppose I don't blame them) but confirmed they knew the animal and would get a hold of the owner asap.

About a half hour later I got a call from the owner.  She said that she lived about two miles down the road and would come get him as soon as she could get out of town (where she was when she got the call from the vet's office).  I told her no hurry, that he'd probably still be here, lounging on the porch.
When she got here, Wallace was happy to see her and jumped right into her SUV.  She was very apologetic, said that they adopted Gunner (their name for him) in July, but that he still got out of the fence and would roam.  We swapped phone numbers and I got directions to her home so I could take Wallace/Gunner home if she wasn't able to get here before I needed him gone.

I knew the house she was talking about.  Just so happens it's the home of one of the Veterinarians with a practice in town.  (No wonder the receptionist didn't want to give out the name of the owner; I just complained about irresponsible dog owners and it turns out it was their boss's dog!!)  Wallace was brought to their office in July by the Sheriff's department because he had wandered into the local Wal-Mart.  Not the parking lot, but IN the Wal-Mart.  So the vet's wife finally adopted him, had him fixed and cleaned up and brought to their house.

I'm glad to finally know Wallace's, I mean, Gunner's story.  And I'm sure we'll be seeing him again.  But the next time he comes for a visit, he'll be greeted not only by Moonshine, but by this little guy: 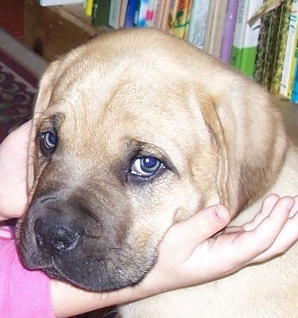 (How's that for a cliffhanger?)
Posted by Carolyn at 9:09 AM