Aaahhhhhh, the fond memories of our first batch of chickens.  And our first eggs.

Then our second and third batches (thanks to the bobcats, coyotes and hawks) of store-bought chicks.  Then our own foray into backyard chicken egg incubating.  Lots of eggs and lots of rooster soup.

But at one point (about a week ago, actually) something occurred to me.  I've been shoveling out the chicken feed at an alarming rate.  And the chicken-scrap bucket on the kitchen counter, which used to provide a nice portion of the chicken-food rations, was no longer sufficient to keep the chickens happy.  Because as soon as I dumped the scrap bucket into their bowl, I felt like that woman trapped in the phone booth in Alfred Hitchcock's "The Birds"............or kind'a like this: 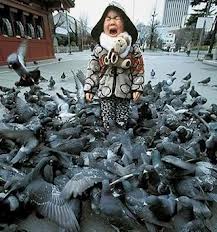 There are no fewer than thirty-seven chickens at Krazo Acres.  Twenty laying-age hens, four roosters and thirteen (or so) younger homegrown chicks of not-yet-determined sex.  And I'm only getting four or five eggs a day.

I know that the egg laying slows down during the winter months and I also have a handful of hens molting now, not to mention the younger birds.  But there's just something not right with having that many chickens and getting less than a half-dozen eggs a day.

But in a few months when the younger hens start laying and the older hens up their production I'll probably be complaining about having too many eggs.
Posted by Carolyn at 12:16 PM