Since I've been talking about using Lambs Quarters in my cooking, I figured I'd do some of you a favor and give you some of my "recipes" for them.  I say "recipes" as they are the kind that is a pinch of this or a little of that.  Man, did I hate that when people told me "season to taste" or "a bit of this" or "until it looks done" I was younger and now, look what I've become....one of them!

I use Lambs Quarter basically in any dish that you would use spinach in.  The younger leaves can be used fresh in salads, but the older and tougher (not that they are that tough) leaves are best used cooked.  And as a bonus, if you pick just the leaves off, the plant will re-grow more leaves.  I've also noticed if you snap half the plant off, it will bush out with more stalks...more leaves!   When I rip the entire plant off or just a part of the stalk, the goats get the leftovers and they love it.  They also have a longer growing season than spinach so you can be enjoying Lambs Quarters even long after your spinach has bolted! 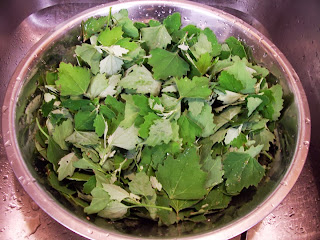 I use them in quiche and omelets, both raw or sauteed before putting them in the egg mixture.  My favorite way is to sautee them with onions first.

And just last night, made Lambs Quarters and Garlic pasta:
I sauteed the onions & garlic in olive oil a bit first, then added the LQ (I'm getting sick of typing Lambs Quarters out), a bit of salt and some Parmesan cheese.

I've been meaning to make a spinach cheese ball using LQ and some fresh goat cheese, but I've yet to be invited to a party where a cheeseball would seem appropriate.  I suppose I could just make it for us, but it just seem like cheeseballs are a party kind'a thing.  And now that I think about it, I bet a LQ and goat cheese lasagna would be darned tasty; no social gathering required!

So go out there & pick yourself some Lambs Quarters!

Here's a link to a bunch of pictures of LQ.  Occasionally there will be some powdery dust on the underside of the leaves or some purple spots, neither of which will harm you if you eat it.
Also, you'll notice that when you try to wash them off, the water rolls right off the leaves making it a bit tricky to wash although it drains very nicely.

I've also noticed that they are very few insects that bother them so most of the leaves will be darn near perfect.

Size varies from only a few inches tall to over five feet tall:
And, as usual, PLEASE be 100% sure of what wild plants you are eating!  I am not a botanist, biologist, naturalist nor do I play one on television.  I'm just a woman who goes around my yard, trying to eat stuff that would normally be mowed over or ripped out and given to the goats.
Posted by Carolyn at 6:16 AM