Paul had off work yesterday and Grandma took Rhiannon for several hours so Paul & I did some hiking around the property.

Marked some of the trees that I didn't want bulldozed, identified two new wildflowers (Lobelia and Blazing Star) and did some weeding / watering / gardening.

It wasn't nearly as hot outside as it had been earlier in the week so I was hoping to get more stuff done outside, but on our second break, I pulled off my boots to find my right foot covered in seed ticks.

Then after cooling off and de-ticking myself, I went back outside to weed the strawberry bed and was relentlessly attacked by a horsefly the size of a silver dollar (not exaggerating) and bit by seven thousand mosquitoes (only slightly exaggerating). 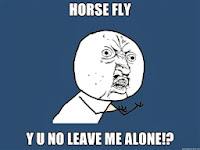 So I didn't weed the entire strawberry bed as planned.  But I did pull a bunch of travelling berry plants that I put into a bucket of water until I decide what to do with them.  I really need to thin the strawberry bed, but I'm not quite sure where I'm going to put them.  This year's harvest was great and I'd like to increase our harvest, but then a new bed is going to have to be built and "soil" found to fill said future bed.

I then moved on to the new garden.  The half-dead and not-producing zucchini plants were ripped out of their mounds and replaced with new seeds and my never-even-sprouted-rotted-in-the-ground row of beans were also replaced with new bean seeds.  All while swatting mosquitoes. 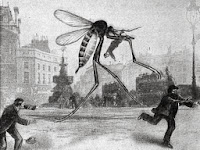 I'm probably pushing the envelope on getting a full harvest from the zukes & beans before the cold weather hits, but what the heck.  At least the cold will kill off some of these darned bugs.  If we're lucky.
Posted by Carolyn at 6:32 AM