The Near Death Experience of an Old (kitchen) Friend

Today, during the bread dough mixing portion of my baking marathon, I noticed a louder than usual noise coming from my beloved KitchenAid mixer (Heavy Duty, 325-watt version).  I turned off the mixer and readjusted the ball of dough in the bowl.  Turned it on again.  Noise was worse.  Then before I could stop it, IT stopped.  Of course, in the middle of my dough-mixing.  Had to finish two loaves by hand (oh, the humanity!!  I know, I know, I'm lazy).

After putting the loaves into the oven, I started my diagnostic evaluation of what was wrong with my mixer.  By putting my flour, honey, salt, yeast and measuring cups away......and calling for Paul. 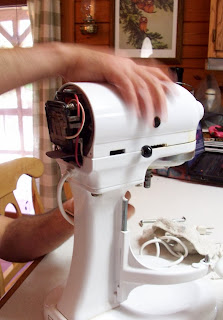 While he was taking apart the mixer, I went online to see if there were any documents or diagrams that I could pull up and found quite a few sites that said the problem was probably with the worm drive gear (whatever the hell that is).  And as Paul pulled some more stuff off the mixer, it did indeed appear that the wormdrivegearthingy was the culprit in my KitchenAid catastrophe.
It's a nylon (i.e. hard plastic) gear that was worn down to practically nothing on one side, thus causing the mixer to not so much mix anything thicker than pudding.  Apparently the worn gear was no longer able to put up with my heavy whole wheat oatmeal honey bread.

As Paul cleaned the grease off the parts, he found a part number conveniently stamped on the gear.  He continued with his mechanic-ing and I pulled up a few sites that had KitchenAid parts, found the most economically friendly one, and now for the low-low price of only $9.96 I will again have a fully functioning mixer....as well as having a spare gear on hand!

Although I was glad that my wonderful, intelligent, sexy, mechanically inclined husband was able to figure out the problem and order the replacement parts, I do have to admit that I was secretly hoping the mixer was toast so I could buy a bigger, better one.  Oh well.  At least we didn't have to fork out $400.

Maybe Santa will shove a KitchenAid Professional 600 Series 6-Quart Stand Mixer (available with free shipping via Amazon, just in case somebody was wondering...hint-hint) down the chimney in a few years.
Posted by Carolyn at 2:38 PM