After only four loaves of bread and three batches of cookies, my KitchenAid broke down again. 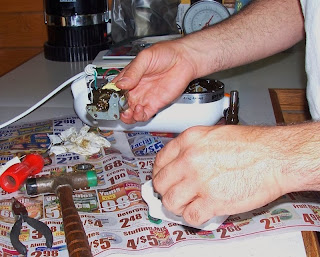 It hasn't really been the same since Paul took it apart & replaced the worm gear.  Didn't sound the same and didn't have the same "oomph" it used to have.  I was able to make 1/2 whole wheat 1/2 white bread with the mixer only complaining a little, but when I tried a 3/4 whole wheat bread, it vocalized it's protest quite loudly and eventually just bit the dust.

Paul took it apart again and the worm gear that was just replaced was already worn.  Luckily I bought two of them when I placed the order so we had the part on hand for immediate re-assembly, but it makes me wonder why the gear lasted fifteen years, but the replacement lasted only hours.  Is something else causing the gear to wear or is it just crappy replacement parts (I did use "authentic" KitchenAid parts)?

After my personal mechanic put the mixer back together, I went back to using it.  But this time I made sure I made my cookie doughs first, then went on to 1/2 whole wheat breads.  And the mixer is starting to protest already.  After only four bread doughs.  I do not want to be without a mixer for our annual Cookie Baking Bonanza next month, so I figured I'd just have to - oh the horror - knead dough by hand.   So now I have a mixer that isn't quite "alive", but not yet dead.

I did, however, pick up a used all-in-one bread makers for $10 and if I venture out to town again I'm going to hit the resale shops to see if there are anymore I can pick up.  I'm not sure if they will be able to handle a 100% whole wheat bread.  But even if it can take some of the load off my mixer, I'll use them for my bread baking until I decide what the fate of my existing KitchenAid and do a little more research (i.e. procrastinate) on a new mixer that can actually handle a loaf of my whole wheat bread.

Or, I can just make bread like people have been doing for the past, say, million years.  I'll probably have less fresh bread around the house....but then I'll probably end up with less "dough" around my midsection.  Which is probably definitely a good thing.
Posted by Carolyn at 4:09 AM