Making Bacon (and Ham, and Sausage)

For the past four or five years, we've had our hog made into the usual, familiar cuts.  Two of those cuts, the ham steaks and pork chops, have bones in them.  But since we didn't have use of an electric saw (i.e. fancy, much nicer, and much faster than a hack saw), going boneless seemed like the easiest way to get all that yummy pork in the freezer.

Although I did say that this was our first pig-solo-gig, we did have some help.  Aaron (who's done more than his fair share of hog butchering) came over to help us with the massive amounts of meat sitting on that cutting table.  Paul and I would have been able to go it alone, but I really wanted Aaron's bacon expertise when slicing apart the Holy Grail of the porker.  And it definitely helped speed things along.

The loins were cut out in two huge, long pieces. They were then cut into more manageable hunks, perfect for roasting or cutting into boneless pork chops.  The tenderloins were cut out whole and wrapped up separately.  The ribs were cut out, trimmed and rolled up and jammed into the freezer.  One of the back legs (ham) was made into roasts and the front legs were ground up along with any other miscellaneous hunks of meat and fat.

One of the other things the butcher would do for us was cure and smoke our hams.  Since we were the butchers this time around, we were going to have to do this step ourselves.  I deboned the second back leg and made it into two smaller hams.  And last, but not least, the belly (bacon) was cut and trimmed.  Oooo....bacon in the mak'n.
But that "bacon" wasn't really bacon yet.  It was just two long flaps of fat and meat, fat and meat.  In order for that hunk of belly meat to become bacon, it needs to be cured.  Same with the hams.  I was a bit anxious about doing our own curing.  It seems like it should be complicated, but it's really darned simple. We bought Morton's Tender Quick for the bacons and Morton's Sugar Cure for the ham.

I sliced the thirty-two pounds of soon-to-be-bacons into eight pieces (perfect for 1-gallon zippy bags).   The Tender Quick curing salts are based upon weight so my chosen recipe called for two cups of Tender Quick, two cups of brown sugar (I just used white sugar and added some molasses) and two cups of maple syrup.  When I started to mix it all up in the tub, I was a little worried.  All that sticky maple syrup caused the cure and sugar to turn into a big, sticky, gloppy blob of a thing.  So it wasn't as simple as just rubbing dry ingredients into the bacon.  I kind'a just smooshed the glob of goo into the slabs of meat and it eventually started to "melt" from the warmth of my hands as I worked it in.  I didn't put any maple syrup on the Sugar Cure for the hams, so they were much easier to work with.

The zippy bags of soon-to-be-bacon are in a spare fridge and get turned every day.  They'll be in there for an entire week and then I'll stick them in the smoker.  The hams will take a little while longer.  They were rubbed down with the Sugar Cure.  A week later, they were rubbed down again.  And in another week, the final rub and another week's wait.  Then finally, after three weeks, the hams will be soaked for a half hour or so and I'll toss them into the smoker.  That's the plan anyhow.  I sureshit hope it turns out.  Can you imagine how pissed disappointed I'd be if they ended up rotting or tasting horrid or if the electricity goes out or if a bear breaks into the fridge and eats everything or if a SWAT team come crashing through our windows and confiscates our homegrown meat in some botched up meth lab bust or, or, or.....

I'll let you know in a few more days.  With pictures, of course.  Probably of me eating all that bacon.

Oh!  I've found a new beauty secret!  All that time I spent cutting that porker up made my hands soooooo very, very soft.  Granted, it was almost impossible to get that water-impervious layer of lard scrubbed off of my hands after butchering, but once it was off they were softer than a baby's butt.  Then, two days later, I treated my hands to a sugar / salt / maple syrup scrub.  The callouses on my hands had just about disappeared.  So not only did I now have soft and smooth hands, but they smelled like BACON!!

I'm now working on my new home-based business; LardLucious.  Hand creams, sugar scrubs, and lotions made from lard!  Bacon scented, of course.  I wonder if I should put a disclaimer on the containers saying that the products should not be used if you'll be in close proximity to hungry people / animals?  I'd hate to have to deal with a lawsuit involving the LardLucious wearer and the neighbor's German Shepherd. 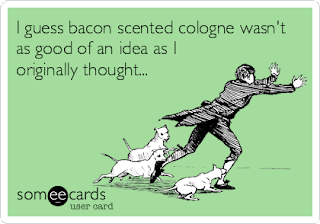