Well, this isn't the most informative post on how to make bacon.  But there are pictures, so that counts as eye candy at least, right?

The bacons cured in the refrigerator for nine days.  On day ten they were taken out of their zippy bags and soaked for several hours to remove excess cure and salt, then patted dry and left out on the porch (it was cccccccooold outside) until the next day.  Paul smoked them for several hours at a low temperature, around 150 degrees, not so much to "cook" them, but to impart a hickory taste to them. 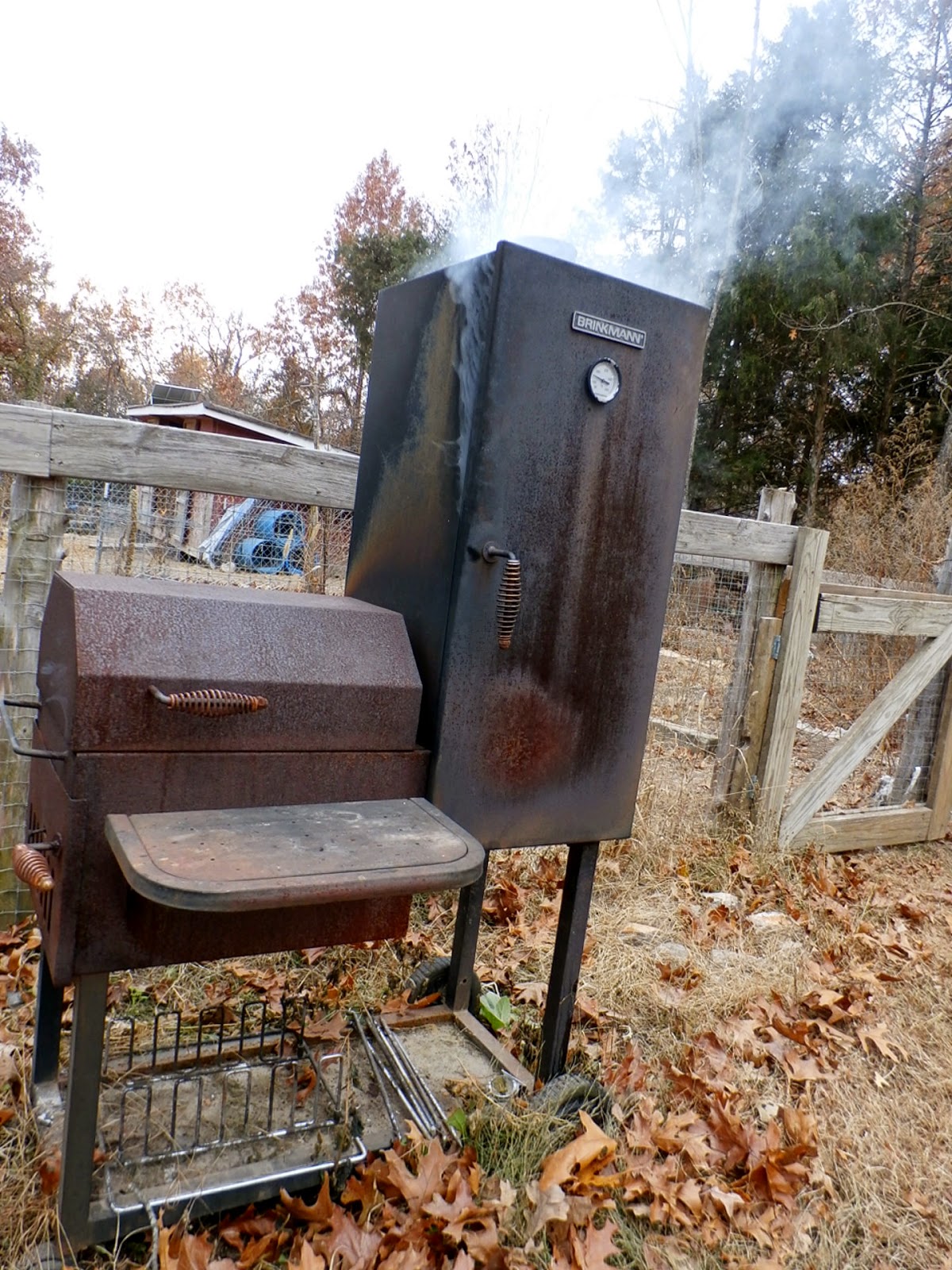 We put them back out on the porch (it was still ccccooold outside, even during the day) to cool off and firm up for slicing. 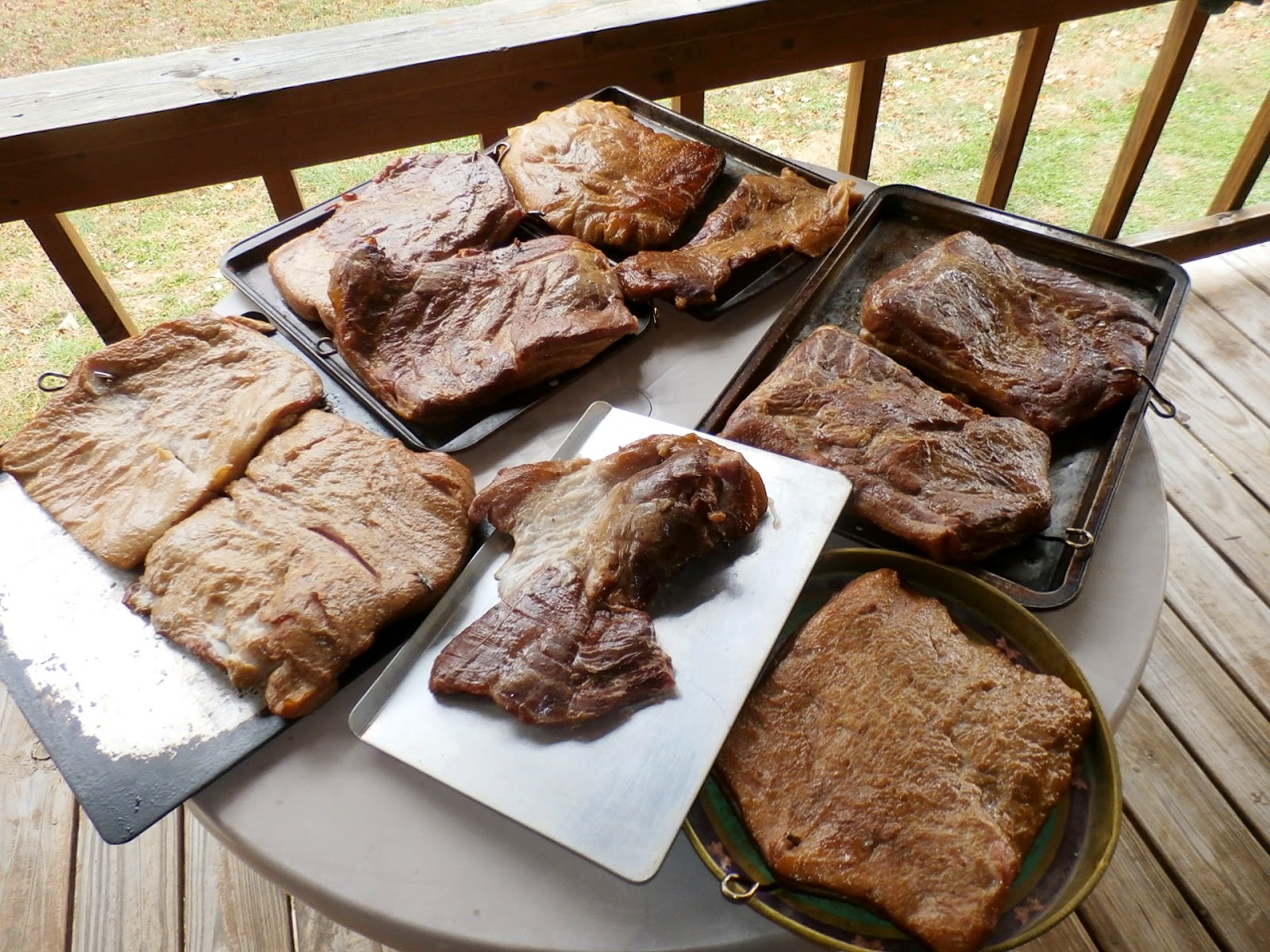 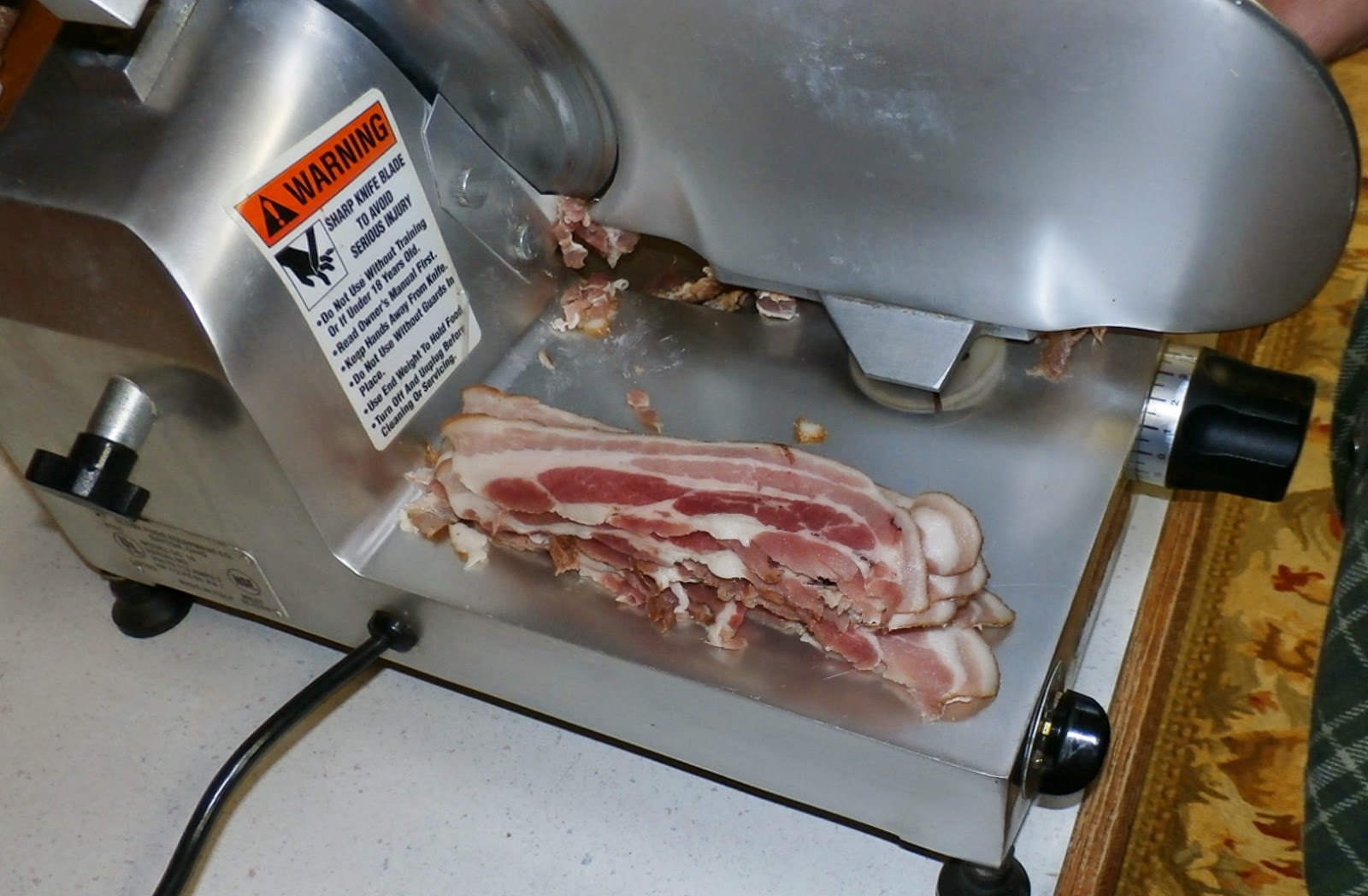 I must say, we're pretty spoiled.  Having that meat slicer is awesome when it comes to home meat processing (thanks again, Dad).  But if we didn't have it, I'd probably just cut the bacons into 2 pound chunks (come on, what family eats just one pound of bacon?!) and freeze it like that.  Then when we wanted bacon, I'd just slice it as needed. 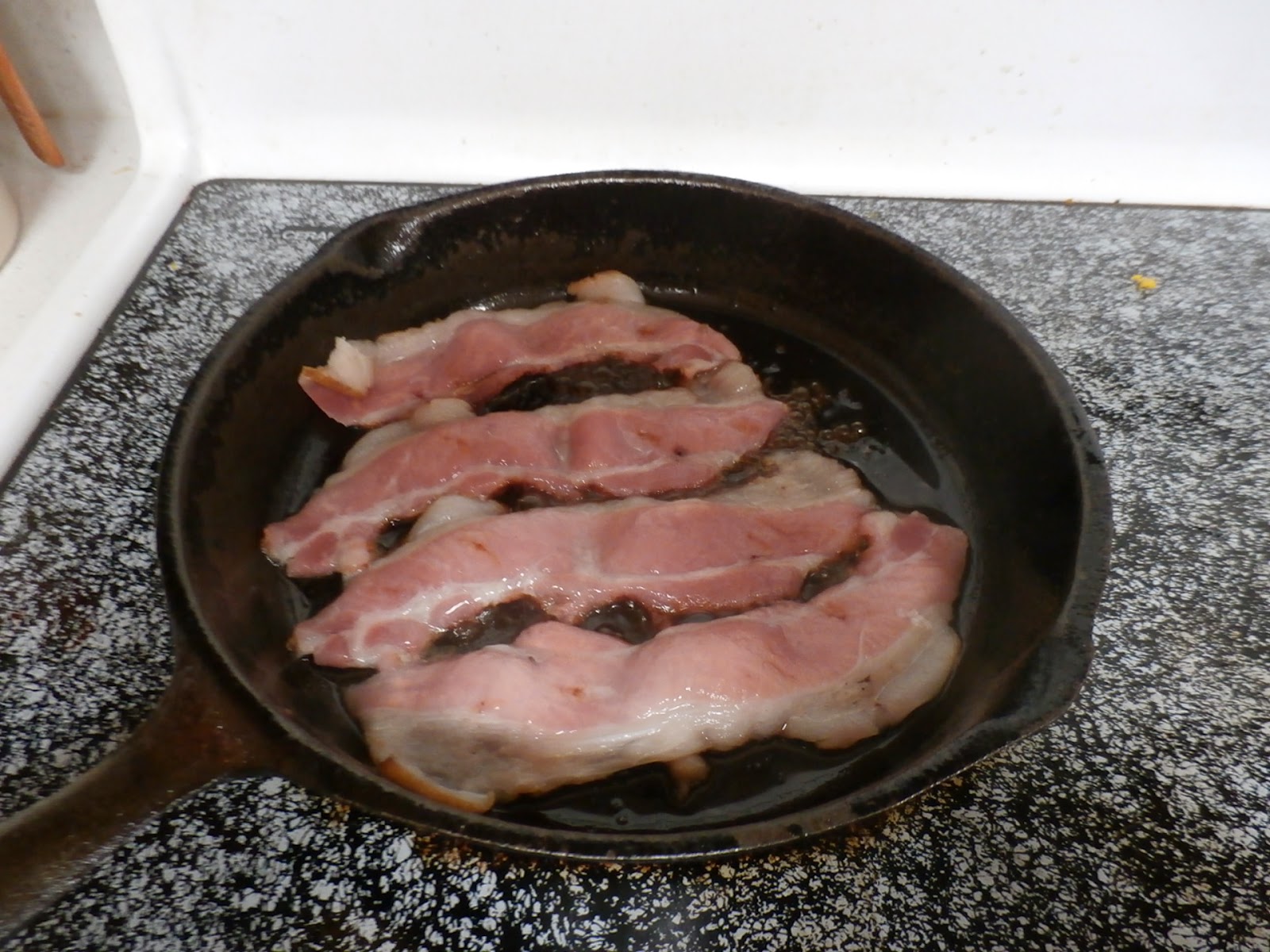 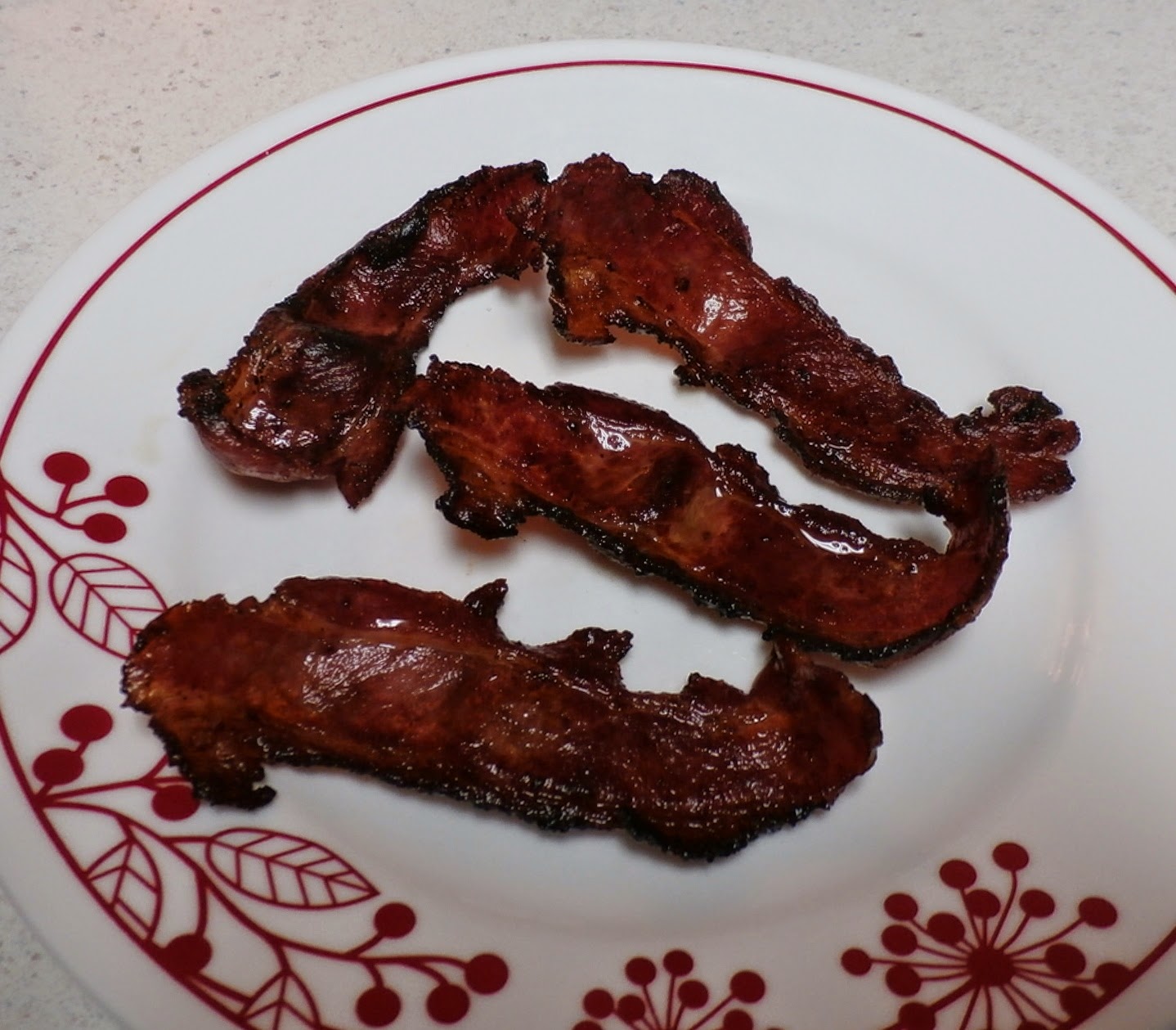 It was good, but not exactly what I was expecting.  I used Morton's tender quick and added maple syrup, so I knew it was going to be a sweeter bacon, but I suppose I was hoping for a more "bacon'y" taste.  And there wasn't really that much fat in a lot of the slabs so there wasn't much in the way of drippings to save (you DO save your bacon drippings, right?!).  Not only wasn't there a lot of drippings, but the maple syrup flavoring was too powerful for what I would normally use the drippings for.

Don't get me wrong.  This bacon is delicious.  But it's not your typical Oscar Meyer package of bacon.  I think I'd call it a "custom flavor".  Which, technically, it is.  Maple flavored and hickory smoked, to be exact.

What I should have done (slaps self in the forehead) was made two or three different bacon rubs.  Then we would have been able to modify our recipe easier.  As it stands now, we have thirty two pounds (minus much taste testing and snacking last night) of this new Hickory Maple bacon and probably fifteen pounds of the "normal" smoked bacon left from the last hog.

Variety (albeit somewhat limited) is the (bacon cure) spice of life, right?
Posted by Carolyn at 3:07 AM