Battle of the Bunny

Earlier this morning, I see Paul come up the porch steps with something cupped in his hands.  He says, "Come see this." and he uncups his hands a bit to reveal a little ball of long-eared fuzz.

He then asks me, "What should I do with it?"  To which I immediately reply, "Kill it".

He gives me a horrified look like I had just told him to kill a cute, fuzzy, harmless, baby animal.

Well.  Ok.  Technically I did tell him to do that. 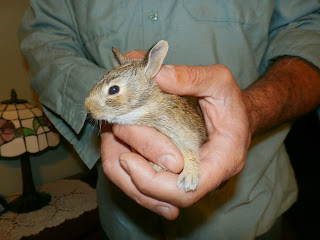 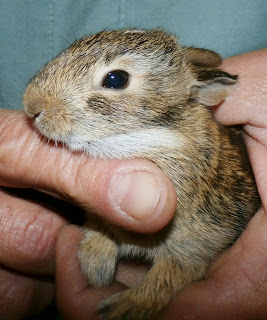 come on LOOK at it!" 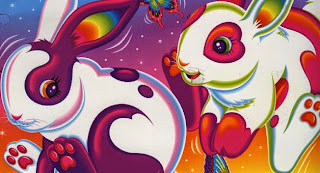 And I lost the battle of the bunny.

I sigh and say something like, "What the hell are we going to do with a baby rabbit?"   This rabbit that will, in mere weeks, decimate our garden, costing us lost produce and lost labor.  I just envision all the vegetables Paul put in the garden, sheared to the ground by rabbit incisors.

Paul brings the rabbit into the house to show Rhiannon, guaranteeing that there's now no way that I'll be able to kill this stupid rodent without getting a total guilt trip.

And that's why we have a baby rabbit in the garage.

There were two baby rabbits, but his/her sibling didn't fair as well as this one did.   Paul found them when he was out hula-hoeing the garden and apparently stepped on a nest, paralyzing one and eventually catching the other and getting it out of the garden.  Paul put the smooshed one out of it's misery (and subsequently provided Charlie with a morning snack) and brought this one to the house.

Rhiannon made it a comfy nest out of newspaper shreds, provided it with some greenery, and will now have to do a report on rabbits for her homeschooling assignment.  And hopefully in the very near future, "Hoppy" will be relocated to my Mother-in-law's house up the road.  Where it will eventually be eaten by a cat, coyote or hawk.

But the baby bunny blood won't be on my hands.

So you now have proof that I am not, in fact, a total meanie.
Posted by Carolyn at 9:11 PM