I don't do Subtle

We live at the end of a dead end, country road.  And there used to be an annoyingly regular influx of lookey-loos, turn-arounds and Sunday drivers that would take the road to the end (i.e. our front yard), then do a U-turn, or at least try to do one.  There isn't really room to bust a U-ie, so most times it was a sixteen-point turn, making me wonder if any of these people ever took Driver's Ed in high school.

We have a driveway alarm so know I when someone is coming down the drive so I try to get out in the road to glare at them meet them before they get to the house.  Sometimes the turn-arounds would be apologetic, wave & say they got lost or ask for directions, but by and large, the drivers would spin around and sling gravel going back up the road. I even had a guy toss his cigarette butt out the window on his way out (I gave him a piece of my mind and had I been closer, would have chucked a rock at his back window).

Since we have a small child and livestock running around the yard, this was not only annoying, but dangerous.

Paul put a farm gate up near the beginning of our property and I was thrilled.  It cut back on those unwanted / uninvited drivers.  But sometimes I get a little lazy forget to close the gate.  And I kid you not, the moment that gate is open we start getting the religious door-knockers and turn-arounds again.  Where's the Girl Scouts selling Thin Mints?  THEY never seem to come down here when the stupid gate is open.

Well, now that we have Charlie the GSD (Giant Sloppy Dog) even if I forget to shut the gate, most people are either hesitant to exit their vehicle or just high-tail it out of here.  Charlie isn't aggressive and if anything, I think he may have at least a mild case of narcolepsy, but just his physical presence is enough to make people not want to stick around to see if he's going to be happy to see you or want to put your head in his mouth.  One of his toys is a basketball.  Which he carries around in his mouth.  Just saying.
So, you'd think that the one-two punch of the farm gate and the GSD would be a subtle enough hint that you are not, in fact, welcome here. 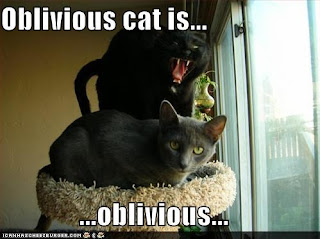 So I had my wonderful Sees-ter make me a couple of these puppies: 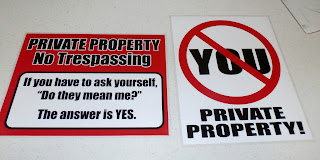 And they are going on the posts on the farm gate.

Dont' think I'm a total scrooge.  My friends know who they are, and that they are welcome any time (especially if they're bringing whiskey or when we're splitting wood).  But sometimes people are oblivious to subtleties and you just have to be painfully, unmistakably, indisputably blunt.
Posted by Carolyn at 3:16 PM