I had been worried that Cloud wouldn’t go into heat again this winter, but she did!   I had also been wondering if Pan were still up to it as I’ve read that even bucks have a season, although I find that hard to believe as he seems to want to breed anything that sits still long enough for him to mount it.
Luckily both parties were very interested.  Cloud even seemed a bit bummed when I put a lead back on Pan & took him out of the pen.  Now all four does have been bred. 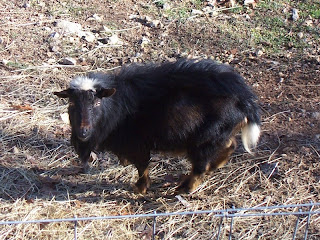 Pan, our Nigerian Dwarf buck (aka Mr. Stink-O)
So our 2011 kidding schedule now looks like this:

Nettie – March 13th
Annette – April 4th
Ishtar – May 2nd
Cloud – May 30th
Only problem is that I still have to get Cloud to warm up to me.  She & Stormy have been pretty skittish, although that’s no fault but my own as I haven’t been out with the goats as much as I should.  If I sit down & stay still for a while, Stormy will sit by me & eat treats out of my hand, but Cloud won’t even take a raisin from me.  Paul is just going to have to do some serious Daddy / Daughter time so I can get in some quality Carolyn / Goat time with Cloud.
I just looked up at the kidding schedule and did some quick math.  We now have six goats in the main pen and two in the back pen, although one is going in the freezer very, very soon.  So that’s seven goats.  Four of those goats are pregnant and will contribute at least four more goats.  And that’s assuming that everyone has only one kid.  So if my math is correct, by mid-Spring next year, there will be ELEVEN goats – more than likely more as Nettie & Ishtar have been kidding with twins.  What the heak am I going to do with a dozen goats?
I sure hope Paul hasn’t done the math.
Posted by Carolyn at 1:55 PM